Magician Richard Hatch will be giving a lecture called "Houdini: American Celebrity" as part of the Utah Festival Opera and Musical Theatre on July 11. Below are the details: 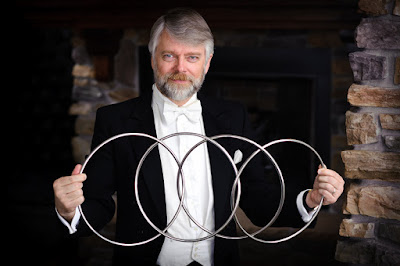 As part of UFOMT's Academy, magician Richard Hatch will debunk some of the many myths surrounding the hugely successful escapologist Harry Houdini in a presentation at the Dansante in Logan at 4:30 p.m. on Monday, July 11th.

Was Houdini really the world's greatest magician? Did he die onstage after failing to escape from his water torture cell? Did he return from the grave to give a message from the beyond to his widow? Was he really the first man to sustain flight in Australia? And what about his relationship with Arthur Conan Doyle, creator of Sherlock Holmes? These and many other questions about Houdini will be addressed in a special Utah Festival Opera and Musical Theatre Academy presentation at the Dansante Recital Hall (59 South 100 West, Logan, Utah 84321) at 4:30 p.m. on Monday, July 11th. Entitled "Houdini: American Celebrity", the presentation by magician Richard Hatch will reveal the stranger-than-fiction truth about the "elusive American" mysteriarch Harry Houdini.

The presentation will include newsreel film of Houdini escapes, a recording of Houdini's voice and an attempt to pierce the veil and receive a sign from Houdini 90 years after his untimely death in 1926.

Deceptionist Richard Hatch was asked to prepare this presentation on the historical Houdini as one of this year's UFOMT offerings, the musical Ragtime, features Houdini as one of the characters. Based on the award-winning novel of the same name by E. L. Doctorow, Ragtime is only one of many theatrical works inspired by the historical Houdini, who has even been the subject of several operas based on his life.

Come prepared to challenge Hatch on the details of Houdini's life and work. Bring questions of your own and learn the truth about Houdini!


Thanks to Richard Hatch.