Houdini back at the Edinburgh Fringe

Houdini will once again be well represented at this years's Edinburgh Festival Fringe (August 5-29) with two Houdini-themed shows.

Mr. Swallow - Houdini features comedian Nick Mohammed as his alter ego "Mr. Swallow" in what the festival describes as "a magical, musical biopic of Houdini that he's definitely rehearsed this time." 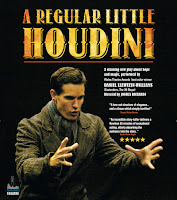 Also at the Fringe will be Daniel Llewelyn-Willams acclaimed one-man show A Regular Little Houdini. I had the pleasure of seeing this in Hollywood during Daniel's current tour of the U.S. I reviewed it HERE.

The Edinburgh Festival Fringe is the world's largest arts festival. It takes place every August for three weeks in Scotland’s capital city. For more information and the book tickets visit the official festival website.