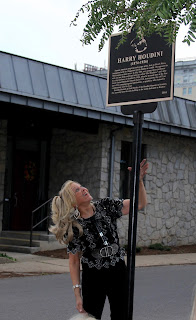 A new historical marker commemorating Houdini's two appearances in Williamsport, Pennsylvania was dedicated last Friday at the corner of Pine and North Streets. The plaque stands not far from the original site of the Pine Street United Methodist Church where Houdini once gave his anti-spiritualism lecture.

Dorothy Dietrich (picture right) and Dick Brookz of the Houdini Museum in nearby Scranton played a key role in uncovering Williamsport's Houdini history. They performed magic and escapes during the dedication ceremony.

Coincidentally, Friday marked 126 years to the day that Houdini first appeared in Williamsport's as part of the Welsh Bros. Circus. You'll recall that it was during this first tour with the circus that Houdini doubled as "Projea the Wild Man of Mexico" in the sideshow. It's very likely he appeared as the Wild Man while in Williamsport. Quite a journey to go from circus freak to historical honoree.

The Williamsport Sun-Gazette, who covered Friday's event (which you can see at their Facebook page), also covered Houdini's first appearance on July 1, 1895. 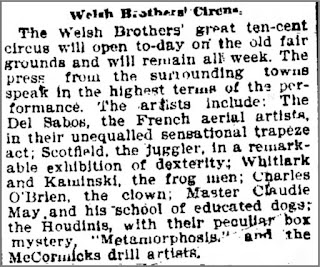 Thanks to Dorothy Dietrich and Dick Brookz.