Here is a ratings chart for all 10 episodes Houdini & Doyle. The series aired in the U.S. on FOX from May 2 to July 4, 2016. The charts shows the series hit its highest viewership of 2.615 million with episode 4, Spring Heel'd Jack, on May 23. The lowest viewership came with episode 7, Bedlam, on June 13. Is it a coincidence that "Bedlam" was the episode that focused on Doyle over Houdini? Just saying. 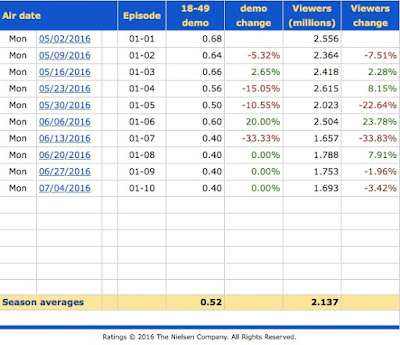 This chart comes from the website TV Series Finale which reports ratings and tracks news of series renewals. For Houdini & Doyle the site reports:

The ratings are typically the best indication of a show’s likelihood of staying on the air. The higher the ratings (particularly the 18-49 demo), the better the chances for survival. Though FOX is airing this show in the United States, it originates in the UK so it’s unclear what impact American ratings will have on Houdini & Doyle’s chances for a second season. Will it be cancelled or renewed for season two? Stay tuned.


Creator David Shore told the Television Critics Association that the plan for Houdini & Doyle "is to do many, many more." Actor Stephen Mangan, who plays Doyle, says if there's going to be a second season, they would start filming in October. That seems to suggest that a renewal decision would need to come sooner than later as scripts would need to be written in just a few months.

Of course, Houdini & Doyle was produced independently, so it isn't really locked into any network schedule. It could adopt a more cable-like model with extended periods of time between seasons, or even change networks if FOX didn't want to renew. I'm also wondering how all-important ratings still are in this world of increased streaming and changing television watching habits.

Josh Brandon, who wrote episode 5 and has been very active on Twitter @THEJoshBrandon, speculates that a renewal decision would need to come before the actors contracts expire, "whenever that is." Hopeful fans on Twitter and Facebook have kept up a steady renewal campaign #RenewHoudiniAndDoyle. 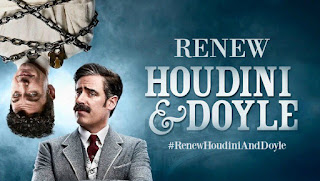 Houdini & Doyle is currently streaming on FOX NOW, Hulu, Amazon and iTunes. It leaves Hulu on August 8 and FOX NOW on August 9. While it has been released on DVD in the UK, there's still no news of U.S. DVD release.