The deaths of every citizen in a small town draw our heroes into "The Pall of LaPier," the tenth and final episode of Houdini & Doyle. 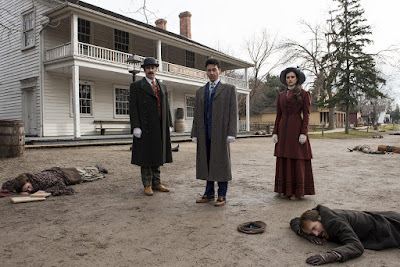 Continuing their adventures in Canada, Houdini, Doyle and Adelaide Stratton head to the small town of LaPier where 47 citizens are found dead without explanation. The only survivors are a priest and a young girl. A local indian, Wattabakinai a.k.a. "Walt" (Brandon Oakes), is spotted at the scene, causing the police to suspect his displaced tribe of mass murder.

Walt turns out to be wise in his ways and teaches the trio how to get in touch with their dreams and inner spirits. Houdini even gets an indian name: "Jailbreak." He also finally comes face to face with the young mystery woman (Bo Martyn) who has been following him. She says she's his mother. But it turns out to just be a dream...maybe. For all three, the line between dreams and reality become muddled in LaPier.

But solving the mystery of LaPier is not the only adventure in this episode. When a plot to assassinate President William McKinley is uncovered, the action shifts to Buffalo and the Pan-Pacific Exposition. During the final action, Doyle is shot by the would-be assassin, who turns out to be Adelaide's estranged husband. Adelaide guns down her own husband in order to save the president. (Nevermind that William McKinley actually was assassinated at the Buffalo exposition in 1901.) While Doyle is unconscious, Sherlock Holmes once again pays him a visit, this time played by Mark Caven. 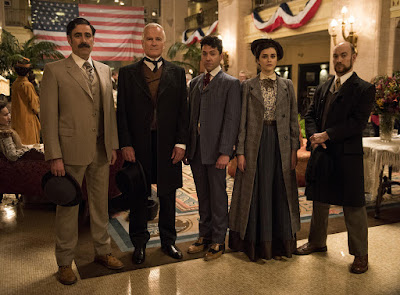 The very end finds the battered trio heading back to England. In his cabin, Doyle takes up his pen and begins writing "The Hound of the Baskervilles," the story that will see the return of Sherlock Holmes.   On deck, Houdini comes face to face with the ghost of his dead mother, and this time it clearly isn't a dream. Houdini's inability to explain the apparition is how we end the episode and the first season of Houdini & Doyle. 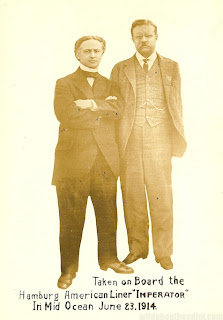 While Houdini never met President McKinley, let alone saved his life, he did meet McKinley's Vice President and successor, Theodore Roosevelt. Houdini performed for the former president during a transatlantic crossing in 1914. His feats so impressed, that Roosevelt reportedly took him aside and asked if it was real magic. "No Colonel," Houdini is said to have answered, "It was just hocus pocus." Houdini also met President Woodrow Wilson who attended Houdini's show in Washington D.C. on April 22, 1916.

In this episode, we hear Michael Weston's Houdini say, "Am I the only one who doesn't like Canadians?" The real Houdini had nothing against Canadians. Canada was a regular part of his travels and played an important role in his early career (read: Bruce MacNab mines Houdini gold in the Maritimes). This is most likely a playful nod to the fact that on October 22, 1926, Houdini was struck in the stomach by a Canadian student named J. Gordon Whitehead. This started a chain of events that would culminate in Houdini's death on Halloween. Maybe it's fitting that this final episode has a moment that foretells Houdini's own end.

Throughout this series Houdini has been shown to be a very stylish dresser. Michael Weston's wardrobe has been a highlight and has drawn comments on social media. While studio portraits of Houdini at this time show him dressed in stylish clothes, in some he even sports a top hat and cane, in his later years, Houdini became a famously sloppy dresser in everyday life. This paragraph from the seminal biography Houdini!!! The Career of Ehrich Weiss by Kenneth Silverman sums it up:

"Houdini No Beau Brummel," one reviewer wrote, having found him in a shabby felt hat, "a large grease spot on the lapel of his coat and tiny hole in the knee of his trousers." In photographs of him taken off stage, his readymade suits often seem wrong-sized, baggy, and creased; bits of string droop from his bulging pockets, his shirts are crumpled and stained, his fingernails dirty. His first biographer, Harold Kellock, wrote in cooperation with Bess herself, and reported that she had to steal his soiled underwear in the night to get him to change it. 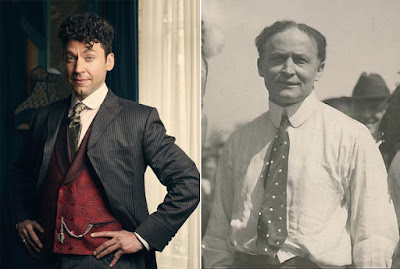 Finally, did Houdini ever come face to face with his mother's ghost? If so, Houdini kept it a secret. But Houdini was forever haunted by the memory of his mother and would probably say he felt her presence at all times. So maybe this supernatural end to the episode and series can be considered fact indeed.

You can watch the full Season One of Houdini & Doyle at FOX NOW and Hulu.