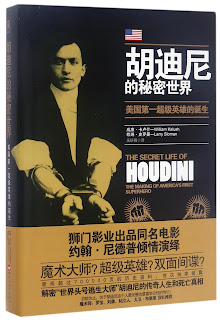 Bai Hua Zhou literature and Art Publishing House has released The Secret Life of Houdini by William Kalush and Larry Sloman in China. The hardcover came out on May 1, 2017.

The Secret Life of Houdini was published in 2006 and was the first major Houdini biography since Ken Silverman's Houdini!!! The Career of Ehrich Weiss. While Secret Life contains a rich amount of new material and some amazing never-before-published photos, it also contains a fair amount of Houdini mythology and puts forward the sensationalistic notion that Houdini worked as a spy (a theory I don't buy at all). So it's a mixed bag.

The Chinese edition of The Secret Life of Houdini can be purchased at Amazon.com (U.S.) and Amazon.cn (China).