Last year magician Lee Terbosic successfully recreated Houdini's suspended straitjacket escape in Pittsburgh on the 100th anniversary of the stunt (November 6, 1916). One of the things that inspired Lee was a famous photograph taken that day by Pittsburgh Sun Staff Photographer N.M. Jeannero of the massive crowd watching Houdini accomplish his escape.

So Lee called upon his friend and acclaimed photographer Jared Wickerham (Getty Images, Nike, The New York Times, Sports Illustrated) with the challenge of capturing the exact same shot from 1916. The result, as Lee puts it, "was pure magic." 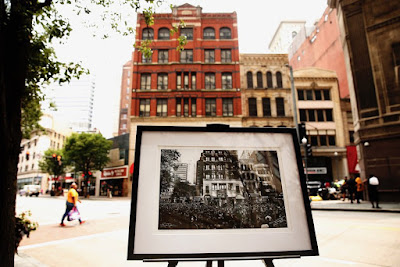 Lee is now making 100 prints available of his recreation photo. Each is individually signed and dated by Jared Wickerham in the exact same way N.M. Jeannero signed his own image in 1916. The image is printed on quality Hahnemuhle Rag Satin archival photo paper and includes a certificate of authenticity.

You can purchase Lee Terbosic's "Houdini 100" print while supplies last via his official website.