When I thought Charles Nelson Reilly was Houdini 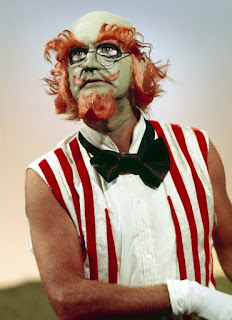 I typically track my interest in Houdini back to my first viewing of the classic Tony Curtis Houdini biopic on November 16, 1975. But the truth is my first encounter with Houdini came much earlier. So this is my strange confession.

I have no idea what age I was, but when I was very young, we had a turtle that we kept in a shallow fishbowl on a kitchen counter top. Somehow the turtle was able to escape his bowl, get down from the counter, and get inside a closet. The turtle did this three times, at which point my parents named it "Houdini."

It was then my father explained to me who "Houdini" was. I can vividly remember this moment. He told to me Houdini was a man who lived long ago and who could escape from anything and never failed. This information blew my mind, especially as I was raised with no religion whatsoever. This was really the moment that I learned of the miraculous; that a seemingly supernatural man once walked the earth and proved his powers to all who challenged him. Damn!

Flash forward to 1971 when, like so many of my generation, I watched some pretty trippy children's television. One of those shows was Lidsville, produced by Sid & Marty Krofft. What I really liked about the show was the opening song which told the story of Mark (Butch Patrick of Munsters fame) who dared to sneak into a magician's dressing room to discover the secret of his magic hat. This sends Mark into a psychedelic land of "hat people" ruled over by an evil magician named The Great Horatio J. Hoo-Doo, played by Charles Nelson Reilly. Check out the full opening below.

Now, in my 7-year-old mind, I thought Hoo-Doo was Houdini. Not that it was an actor playing the part, I really thought he WAS Houdini. He fit the bill as the all-powerful wizard of lore, the very source of magic, who was somehow both menace and friend to young Mark. And he had the name. In fact, in Episode 15, Houdini gets a name check in one of Hoo-Doo's songs:

I don't know how long this idea remained in my head, because beyond the credits, I lost interest in Lidsville, which only lasted 17 episodes. But the idea of Houdini was planted deep within me, and I was starting to pick up on pop cultural references, such as the name Hoo-Doo. So, yes, my earliest conception of Houdini was some kind of a cross between Jesus Christ and Charles Nelson Reilly. And when Tony Curtis arrived on the scene, complete with his martyrs death and a promise of resurrection, I finally decided, "Okay, its time to find out the truth about this guy."

I'm still trying to do that.

For the full story of Lidsville, check out this terrific post at Cult Oddities. Below are links to some more, less psychedelic appearances of Houdini on children's TV.