Criss Angel joins Houdini on the Walk of Fame 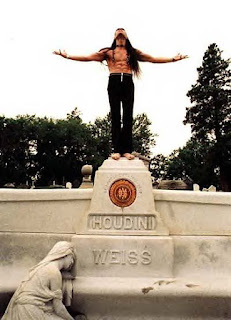 Magician Criss Angel received a star on the Hollywood Walk of Fame yesterday. I admit I'm not a follower of Angel's work, but I do like that he's an open admirer of Houdini and repeatedly pays tribute to the escape king, whether it be a Houdini motorcycle in his Las Vegas showroom or naming his show "Believe" after the famous codeword.

In fact, Criss kicked off his speech at yesterday's dedication ceremony by telling the story of how inspired he was when he first came to Hollywood in the 1990s and saw Houdini's star. "It's unbelievable," said Angel. "Houdini died in 1926 and this star will remain here for as long as this planet is here."

Angel's star sits across the street from Houdini's star at Hollywood and Orange. Also in the vicinity are Penn & Teller, David Copperfield, and Bill and Milt Larsen.

Other Houdini-related stars to seek out on the boulevard are actresses Mae Busch (The Grim Game), Lila Lee (Terror Island), and Nita Naldi (The Man From Beyond). Tony Curtis and Janet Leigh are also honored.

You can see photos from the event at the Daily Mail.