The "giant wheel" in the basement of 278

Today I have an addendum to my Inside Houdini's 278 report from last week. I mentioned in that report that the only place I didn't see was the basement. The owner had locked it for the open house. But what I didn't mention was the conversation I had with the realtor, Beverley, about what might be down in the basement.

I was standing with Fred Pittella at the time, and when we discovered we could not go down, Beverely assured us that there really wasn't much to see. Then she added, "There's just this giant wheel."

Both Fred and I went white. A giant wheel? 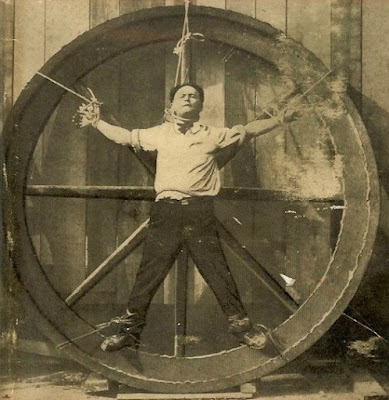 I quickly pulled up the above photo on my phone and showed it to her. She nodded and said this might the wheel. She then said she would take a photo and send it to me when she had a chance.

The idea that this giant wagon wheel could be down in the basement of 278 was pretty exciting, but I didn't want to say anything until we knew for sure. I was also a little skeptical because I assumed this famous photo was taken in Hollywood during Harry's "extreme Houdini" photo shoot, in which they roped him to pretty much anything that looked menacing. What would it be doing in his basement in New York?

Now David Saltman, during his own visit to the house, was able to get down into the basement. David provides a photo of the wheel and, unfortunately, it's not the same one. It's just a giant wheel. But could it have some other Houdini connection? The mystery remains.

David made some interesting discoveries and has also posted several photos of the basement, so head on over to the "The Houdini File" and read: TRAPDOORS & SECRET PASSAGES IN HOUDINI'S HOUSE.