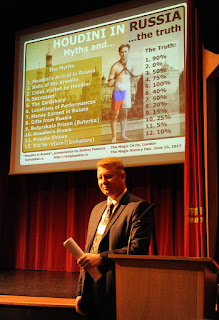 David Saltman at The Houdini File reports that Andrey Fedorov, chief historian of the Russian Association of Magicians, recently presented a lecture at the Fifth Magic History Gathering at The Magic Circle in London that challenged many of the accepted stories about Houdini's one and only tour of Russia in 1903. Chief among these is whether or not Houdini really escaped from the Siberian Transport Prison Van. (Oh my!)

David is himself an expert on Houdini in Russia and says he's in "lively correspondence" with Andrey, so I look forward to reading what David might have this. I'll share his links here.

UPDATE: David's first post is up. Happily, Fedorov not only confirmed the Prison Van escape, but discovered that Houdini might have done it twice! Read:


1. WHAT HOUDINI DID IN RUSSIA - AND DIDN'T DO!
2. HOUDINI'S RUSSIAN CROWN JEWELS (new)