Is there a Houdini pet buried in West Hollywood? 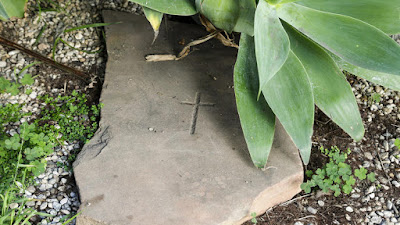 An article in last weekend's Los Angeles Times about a television newswoman's need to downsize from her large home in Beechwood Canyon to a rental in West Hollywood (this is news?) contained the following curiosity:

Murphy was also tasked with figuring out how to change the configuration of the living and dining spaces that Henderson described as “awkward.” They wanted to make use of every inch of space while avoiding clutter and finding a way to reflect the Spanish-inspired exterior of the historic development. (Legend has it that one of famed illusionist Harry Houdini’s beloved dogs is buried in the courtyard.)

When one mentions Houdini's dogs, one thinks of Charlie and Bobby. Charlie died in 1909. Bobby died on December 15, 1918. Houdini was not in California during either of these times. There were other dogs -- Silverman speaks of a dog named "Ehrich" -- but those might have belonged to other family members (a family photo in Henning shows an assortment of dogs and cats). So I'm skeptical that any Houdini dog is buried here. However, there is another possibility.

Following Houdini's death, Bess and Ed Saint moved to Los Angeles and lived at several different addresses between 1933 and 1943. Among their residences was one at 8565 West Knoll Drive in, yes, West Hollywood (as can be seen on the letterhead above). The Times article does not give the address of the newswoman's rental, but but if it's anywhere near West Knoll, this could be the bungalow where Bess and Ed lived. 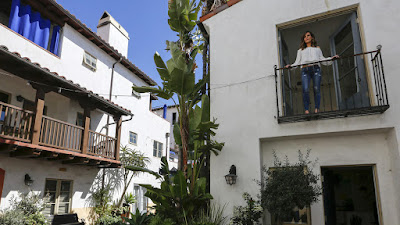 Bess had many pets. She was especially fond of birds. As far as I know, she did not have a dog at this time, but she did have a pet marmoset named "Satan" (so named because it was vicious to all expect Bess). I don't know when Satan died (he was 10 in 1936), but I could see Bess giving Satan a burial in the garden.

Among the (27) photos accompanying this article is one that shows a slab with a cross (above). It doesn't specifically say this is the rumored gravesite, but it certainly appears to be. So is this the grave of Satan?

Do I dare suggest...exhumation? Or do we have to argue that Satan might have been poisoned first?

Bess letterhead from the collection of Jim Rawlins.