Houdini returned to Los Angeles in 1924

I love making Houdini discoveries having to do with my hometown of Los Angeles, and while working on my 1924 chronology, I made a whopper! Conventional wisdom had been that Houdini last appeared in Los Angeles in 1923 when he played the Orpheum and Hillstreet theaters as part of his nationwide vaudeville tour that year. But it turns out that is not the case. Houdini came back to L.A. in 1924!

Houdini returned to Los Angeles as part of his Lyceum and Affiliated Bureau lecture tour in which he exposed the methods of fraudulent spirit mediums. His talk was called, "Can the Dead Speak to the Living?" Houdini gave two lectures on October 27 & 28 at the Philharmonic Auditorium located at 5th and Olive Street across from Pershing Square (where Houdini was once roped to a cannon). Los Angeles was one of four cities on the tour in which Houdini received 50% of the net profits.

By this time, Houdini's friendship with Sir Arthur Conan Doyle was at an end, so the gloves were off when he told the Los Angeles Times: "Doyle thinks he is a Messiah who has come to save mankind by instructing them in the mysteries of occultism but instead of that he is misleading then public and his teachings are a menace to sanity and health. I have investigated his work and know whereof I speak."

While in Los Angeles, Houdini stayed at the Biltmore Hotel, also in Pershing Square. While the Philharmonic was demolished in 1982, the Biltmore still stands as the Millennium Biltmore and is a downtown landmark. I was especially excited to discover that Houdini had stayed here. The Black Dahlia murder has always fascinated me, and the Biltmore is famous for being the last place Elizabeth Short (a.k.a. "The Black Dahlia") was seen in 1947. I've been to the Biltmore several times on Dahlia pilgrimages. Little did I know I was also walking in Houdini's footsteps! 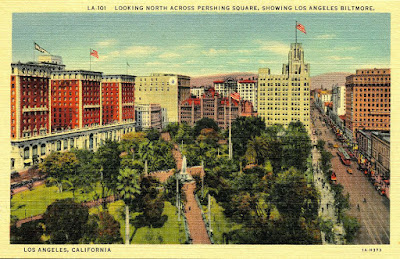 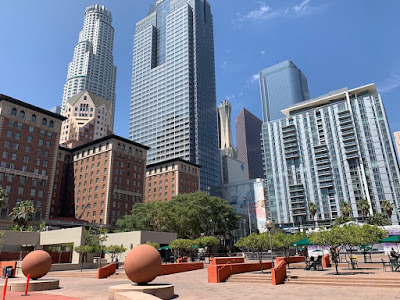 I used to think Houdini's movies were the most under-reported aspect of his career. But I now believe it to be his 1924 lecture tours. This was a major change in direction for Houdini, and he appeared in many cities and venues that have never been properly recorded. Looks like Houdini's "year of the ghost" will be a topic to tackle in a future post.