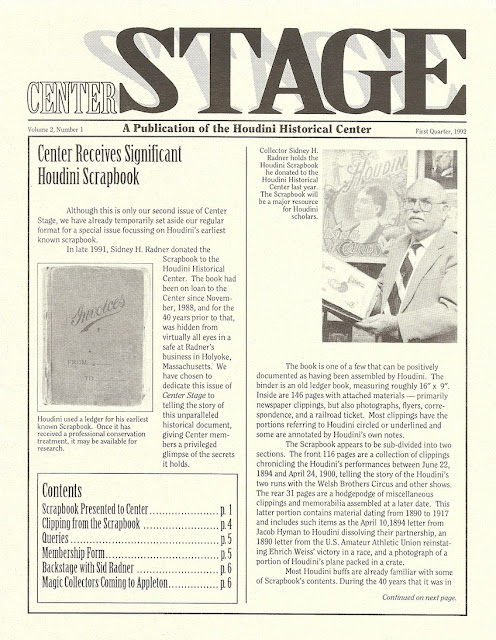 The second issue of what would eventually become known as the Mystifier is devoted largely to Houdini's first scrapbook. The scrapbook was donated to the Houdini Historical Center by Sidney Radner under the condition that is undergo professional preservation (at a cost of between $5000-$10,000). The book is described as thus:

The scrapbook appears to be sub-divided into two sections. The front 116 pages are a collection of clippings chronicling performances between June 22, 1894 and April 24, 1900, telling the story of the Houdinis two runs with the Welsh Brothers Circus and other shows. The rear 31 pages are a hodgepodge of miscellaneous clippings in memorabilia some mold at a later date. This latter portion include such items as the April 10, 1894 letter from Jacob Hyman to Houdini dissolving their partnership, an 1890 letter from the U.S. Amateur Athletic Union reinstating Ehrich Weiss' victory in a race, and a photograph portion of Houdini's plane packed in a crate.


Some clippings from the scrapbook are reproduced along with a transcription of the "Risey in the Box" article from the Coney Island Clipper, June 22, 1894, the day Harry and Bess were married. This is oldest news-clipping from the scrapbook. 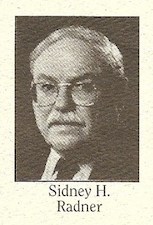 In his "Backstage with Sid Radner" column, Sid tells a story about Houdini and Arthur Lloyd, "The Human Card Index", related to him by Walter B. Gibson. He recommends Patrick Culliton's article about Jack Hayman in the October issues of Genii. He notes that Pulitzer Prize winning biographer Ken Silverman recently visited the HHC "researching a book on Houdini." He concludes with this:

My wife Helen and I recently attended a workshop which presented the beginning of a Houdini musical–hopefully for Broadway. Finally, I have also seen stories in the press about a new Houdini movie. HOUDINI LIVES!


The play Sid is talking about is likely the musical that ultimately appeared at the Goodspeed Opera House in 1997 (it didn't make it to Broadway). The movie was almost certainly the on-again off-again Ray Stark project, which was in the news at this time as on-again.

The newsletter concludes with the news that the 1992 Magic Collectors Association convention will be held in Appleton May 7-9, the first time the convention was to be held outside Chicago, and that a special expanded Houdini exhibit would be created especially for the weekend.