We're getting closer to putting Houdini in Laurel Canyon (for real) 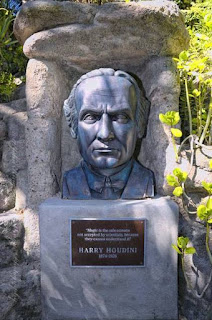 Did Houdini really live in Laurel Canyon? That's a question I get asked all the time. At the moment, we only know for certain that Bess and Ed Saint rented a guest house across the street from what is today called the "Houdini Estate" (Bess had parties at the larger estate, hence its reputation). Houdini may have rented that same guest house while he was in Hollywood in 1919 making The Grim Game and Terror Island. However, conclusive evidence for this remains elusive.

But recently while working on the year 1919 for my New Houdini Chronology, I found two newspaper clippings that get us a step closer to putting Harry in that house!

The following comes from the Los Angeles Daily Times, April 18, 1919. It announces Houdini's forthcoming arrival in the city and details about where he will stay. 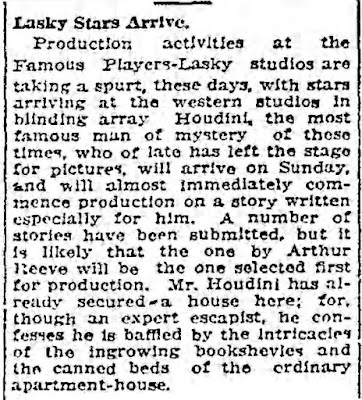 This is significant in that here we have firm evidence that Houdini rented a house in Hollywood. The exclusion of an apartment-house is particularly important. That's because in 1917 Jesse L. Lasky built the Hillview Apartments on Hollywood Blvd. where actors could live while working at the nearby Lasky Studio on Vine Street. This would have been the logical and practical place for Houdini to stay at this time, and it always hung out there as a possibility. But not anymore. Harry wanted a house.

It's said Houdini came to rent the Laurel Canyon house because he was friendly with the owner of the connected estate across the street, Ralf M. Walker. But Walker did not cut Harry a friendly break on the rent, if we are to believe this second clipping from the Pittsburgh Post Gazette dated July 6, 1919:

Again, we have mention of a rental "home." As far as it being "near the studio"... I guess that's relative. Certainly Houdini could have rented a house closer. But even in 1919, the drive to the studio would probably have only taken 15 minutes, and some location shooting on The Grim Game was done on Laurel Canyon's Lookout Mountain.

I also discovered in the April 26, 1919 issue of Holly Leaves that Houdini, Bess, and Julie Karcher initially checked into the famous Hollywood Hotel upon their arrival in the city. Maybe the house wasn't ready yet? 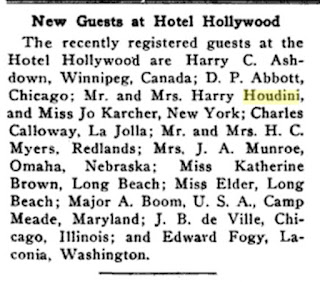 While not a smoking gun, this, combined with the description in Kellock of Houdini's Hollywood home being on a bluff visible from the road, takes us a bit closer to putting Houdini in 2435 Laurel Canyon. But the search for conclusive evidence continues.

UPDATE: I recently found a reference to Houdini and Bess "securing apartments near the Lasky studio in Hollywood" when they returned to L.A. in September to make Terror Island. So it looks like the house was just for The Grim Game stay. I'm thinking chances are good this was the Hillview.