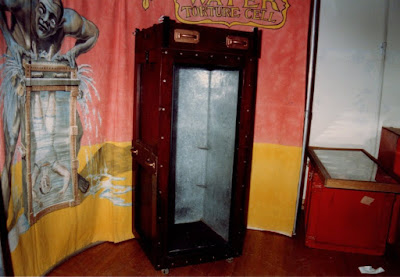 Magician and collector Abb Dickson, who passed away last year, owned a Water Torture Cell that he claimed had belonged to Houdini himself. Abb's cell most famously appeared in the TV movie The Great Houdinis with a false front to hide an extension added to accommodate the stuntman's height. But why did Abb believe his cell was a genuine Houdini USD?

In 2003, Abb shared the full story of how he discovered his cell with Water Torture Cell historian and enthusiast James Criswell. Now James graciously shares with us the story in Abb's own words.

I was involved with the Houdini Collection at the University of Texas at Austin, I had 'volunteered at my own expense' to go to Texas and open all the boxes that had once been packed away at the old Texas Tower. There had been a fire there, and nothing had been opened since the water damage, etc. The Rare Books section had just moved into a new building, and the collection was still packed away.....so I went down and spent almost two months opening boxes and working with their conservatory team to keep the old paper from turning to mush.

One of the 'benefits' I got for my services...was the ability to make a Xerox copy of any paper that I wished. The originals, of course stayed with the Library.

One of the pieces, was a Storage Warehouse receipt in England, where certain crates had been placed into storage...around the same time that Houdini and Hardeen were going around trying to squelch the "Miss Undina" person who was also performing a torture cell.

The next year, while packing for a trip to England, I remembered the receipt...and took it with me. In London, I looked up the company...and they were still in business, so I thought I'd pay them a visit - hoping to see if they had ledgers which might show either Houdini's or Collins' signatures, and information as to what might be in the 'mystery crates.'

When I went in and showed the copy of the receipt, the present owner of the warehouse said, "Are you here to claim the crates?....we still have them, but they are in one of the corners

We discussed 'British Salvage Rights,' and I agreed to 'claim/purchase' three of the crates, that might be easiest accessible. I waited for about two hours, and they brought three huge wooden crates up to the loading dock. The first one he opened, he peered inside and said, "It's an Aquarium, isn't it??" Lo and behold, it was the glass front, sides and bottom of a WTC. The second crate contained the foot stocks, the last was just filled with rags and tools. Those three crates were all I could afford at the time, so I had to leave the others in place - they WERE holding up the beams!

Best as we can figure out, and from photographs showing Houdini in a WTC not filled with water, and pieces of other Cells in the background...that the crates were the contents of the Houdini/Collins shop...which was packed up and put into storage prior to the tour through Germany, etc. Rather than just pay rent on an unused shop, they must have just put everything in storage.

The Cell that I have was evidently the "Shop Model" or prototype...as there were several places in which a hole had been drilled, and then re-plugged, etc. Also, only the 'front' was encased in metal....the rest was just mahogany boards, etc. It is a 'rough' version...but exactly the same stocks and release that Sid Radner has. 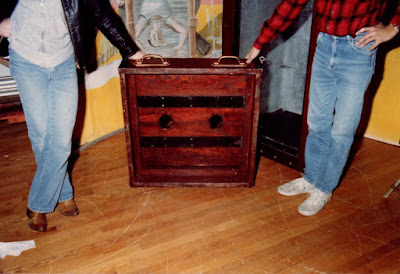 Evidently, it was from this 'prototype' that 4 other WTC were built - 2 for Houdini, and 2 for Hardeen. As it was impossible to fix or repair illusions on the road, they had decided to just carry two - in that way, if one were damaged, the other could be used until the first one was repaired. Mine was evidently packed up as a 'pattern,' should others need to be constructed.

The 'shop' was never again opened in England, and my guess was that the warehouse receipt was just 'lost amongst the papers' of Houdini's affairs....and why should THEY pay for retrieving just a bunch of tools, etc.

When I presented the results of my trip years ago at the Chicago Magic Collector's Convention, Sid Radner and I had quite a discussion as to where the 'other' completed cells might be. We both agreed that yes, Sid's was the last one that Houdini himself had used...but no one knows where the other 3 might be.


A few points. The gaff on this cell and Houdini's cell are by no means the same. So Abb has that part incorrect. I've also never heard of Hardeen doing the Water Torture Cell. In fact, Milbourne Christopher explicitly states in Houdini The Untold Story that Dash never did the USD because he could not fit inside. And that's another thing; this cell is larger than Houdini's final cell. This cell is reported to stand 68" tall on a 30" square while Houdini's stood only 59" tall on a 26-1/2 square. So it is by no means a "pattern."

But if we are to accept Abb's story as told, there are a couple of other possibilities that come to my mind as to why this cell would be warehoused by Houdini in London. The first is that it could have been the prototype he used in his 1911 stage-play, Challenged or Houdini Upside Down, which he performed once in London in order to copyright the effect. Another possibility is that this was the cell Houdini made for "Miss Trixy" (Wanda Timm), whom he set up as a rival act to undermine the infringing Miss Undina in 1912. But neither would require a larger cell.

It should be noted that Abb owned a Milk Can that he also claimed as being original to Houdini. I don't know the story behind that one, but I took a good look at that Can in this 2015 post.

So what do we think? Is this a genuine Houdini Water Torture Cell? I never knew Abb Dickson, so I don't know if he was prone to mythmaking about his collectibles. But this is the kind of experience that all collectors dream of having, so wouldn't it be wonderful if this story were true?

In 2011 the cell was put up for sale on eBay (auction pic below). Today Abb's Milk Can and Water Torture Cell are owned by escape artist Troy Milligan. 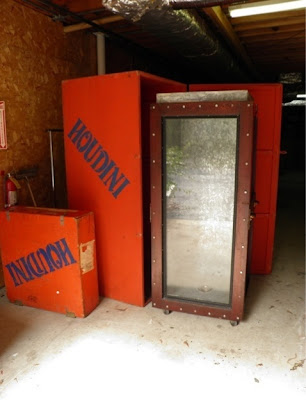 Thanks to James Criswell for allowing me to share this strange tale here on WAH. James is making a study of Houdini's USD and is currently seeking any and all photos of the original cell and the current reproductions. He's especially interested in photos of the original cell after its first restoration in 1991 (before its destruction by fire). If you have any photos you think might help James in his research, please feel free to send them to me and I will forward them on. Thanks!

UPDATE: I'm now hearing from several people in the know that this story is as bogus as the cell itself. It's believed Abb created his "authentic" props for a traveling exhibition that he booked into shopping malls, etc. While he maintained the fiction within collector circles (even sharing this story at a Magic Collectors Weekend), most understood Abb to be a bit of a con-man. But like all good con-men, he tells a good story!