Do we only know half of what's on the Houdini voice recordings? 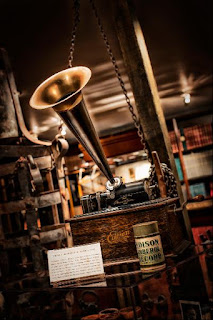 On October 29, 1914, Houdini recorded his voice to six wax cylinders using an early Edison recording machine. Those cylinders wound up in the collection of magician John Mulholland. But according to Milbourne Christopher, Mulholland misplaced them and had no idea where they were. It wasn't until after Mulholland's death in 1970 that they were discovered in a carton of odds and ends, hidden in a large rolled up photograph.

Christopher and a group of three other Houdini enthusiasts brought the cylinders to the Edison National Historical Site in West Orange, NJ. After failing to play on two machines, they found success with a third. For those in the room, it was a remarkable historic moment to be the first men to hear Houdini's voice in 44 years.

Two of the cylinders contained Houdini reciting the stage patter for his Water Torture Cell with slight differences. In one he offers his $1000 challenge "to anyone who can prove it is possible to obtain air inside the Torture Cell." An edited and greatly condensed combination of these two recordings is all that is publicly available. (Arthur Moses played both recordings in full at the Magic Collectors Weekend in Chicago in 2012.)

But newspapers at the time also reported what was heard on a third cylinder, which has never been released to the public and is little discussed. The full AP story by Henrietta Leith even provided a few tantalizing excerpts. 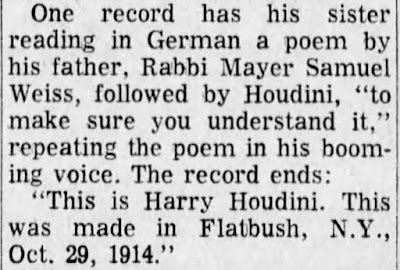 I have seen the original reel to reel master transfers of the Houdini voice recordings along with transcriptions of what they contain. The transcriptions show only the two Water Torture Cell speeches. This suggests the poetry cylinder was never transferred. In fact, if it weren't for the mention in the AP article, I don't think we'd even know about it! (Some papers, including the Los Angeles Times, cut the paragraph about the third recording.)

That brings me to an even bigger point. There were six cylinders total. We know what's on three of them. So what about those other three? Are they copies? Or is it possible we only know half of what Houdini recorded that day in 1914?

David Copperfield owns all six original cylinders and says he has not yet transferred them. But it is something he intends to do. Even if we were just able to hear the poem (which I don't believe even David has heard), that would be incredible. It's now been 48 years since Christopher and the others first heard Houdini's voice in that room in West Orange. Maybe there is another historic moment just waiting to happen.