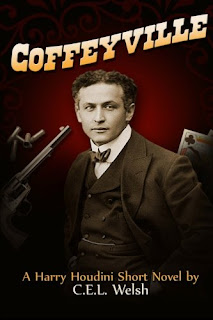 Coffeyville, Kansas, is known as the “Town that stopped the Dalton Gang.” Many shots were fired in the early days of Coffeyville…but there was one lone bullet, fired some years after the Daltons were laid low, that passed unnoticed by most. One man, however, would never forget; a young Harry Houdini, still some years before fame would find him. The events of Coffeyville would ricochet down through the years, giving Houdini the ammunition he would need to pull off the greatest illusion of his epic career. Can you keep up with Houdini’s misdirection?


C.E.L. Welsh is a card-carrying Houdini nut and the author of the superb 2009 Harry Houdini graphic novel from Campfire. I read Coffeyville as an eBook and loved it, so I'm very happy to now be able to add this to my shelf of Houdini fiction.