New production of 'Side Show' in Columbus

A new production of the 1997 play Side Show will run March 3 through March 18, 2018 at the Gallery Players in Columbus, Ohio. The play is about real-life conjoined twines Violet and Daisy Hilton and features Houdini. (Afraid I don't know who the actor is playing Houdini.) 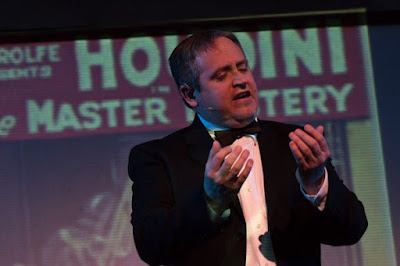 A regional premiere, Side Show is based on the true story of conjoined twins Violet and Daisy Hilton, who became stars during the Depression. It is a moving portrait of two women literally joined at the hip, whose extraordinary bondage brings them fame but denies them love.

The show follows their progression from England to America, around the vaudeville circuit and ultimately to Hollywood on the eve of their appearance in the 1932 movie Freaks. With a completely reworked plot and new songs, the 2014 revival version delves deeper into the backstory of the Hilton twins. As the twins’ forge a relationship with Harry Houdini and face potential separation surgery, the book and lyrics by Bill Russell fleshes out characters and situations that endow Henry Krieger’s music with more sophistication and truth.

Side Show shines a spotlight on marginalized members of society, taking center stage in their own lives and dealing with mainstream emotions of love, success, suffering – and finally – acceptance.


Visit the Gallery Players website for showtimes and to purchase tickets.