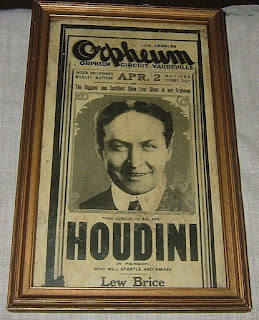 This terrific original (?) playbill for Houdini's appearance at the Los Angeles Orpheum in 1923 sold on eBay today for $821.

There's a lot to like here. Not only does it feature a great photo, but I love the inclusion of "In Person" below Houdini's name. This is because, at this time, four Houdini movies were playing in various theaters around the country, so the Orpheum wanted to make it clear you were seeing the real thing.

This playbill is actually cut in half. You can see the full image on page 160 of The Original Houdini Scrapbook by Walter B. Gibson. However, the seller says he has never removed this from the frame, so maybe there's a chance the playbill is just folded?

UPDATE: So it appears this was returned by the buyer as it proved to be a picture of the playbill, not an original playbill itself. It's back up for auction for $25.