The Great Illusionists by Derek Tait released in UK

Derek Tait's new book The Great Illusionists has been released in the UK by Pen & Sword. You'll recall Derek's last book was about Houdini in the UK. Now he expands the story of Golden Age magic in Great Britain. 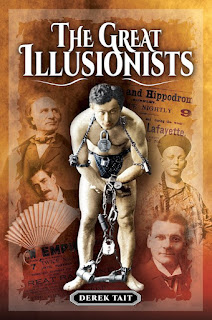 In a time before television, radio and cinema, entertainment was found at the many music halls and theatres up and down Great Britain. Acts were varied and included singers, comedians, acrobats, dance acts, animal acts, magicians and escapologists as well as male and female impersonators. Shows played to packed audiences.

Many people escaped their hum-drum lives, working in cotton mills, coal mines or factories up and down the country, by visiting the local theatre or music hall. Magicians and illusionists attracted huge crowds all over the country. This book includes the stories of some of the best illusionists as well as speciality acts such as Datas and The Human Fly. Some are still well-known names today, while others will be unheard of by many. Marvel at the feats and lives of the Davenport Brothers, the Great Raymond, David Devant, Carl Hertz and Harry Kellar. Relive the tragedies such as the deaths on stage of Chung Ling Soo and the Great Lafayette.

The performers of the late 1800s and early 1900s made way for the many great illusionists and stage artists that we have today. Acts such as David Copperfield, Siegfried and Roy and David Blaine are all influenced by the likes of Houdini, The Great Lafayette and Robert-Houdin and without the innovations of the early artists, the modern performers might not exist - how different would entertainment be to this day?


Purchase The Great Illusionists now at Amazon.co.uk (UK) and pre-order at Amazon.com (U.S.).