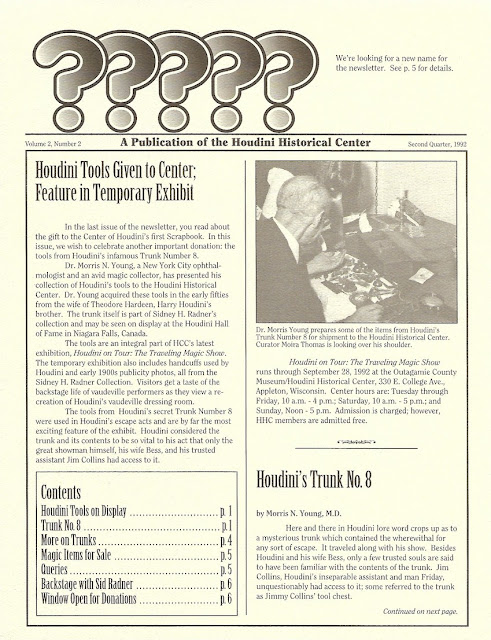 The Houdini Historical Center newsletter was looking for a new name when this third issue was released in 1992. The newsletter asked members to choose from the choices: The Mystifier, Escape, Metamorphosis, Off the Cuff, Houdiniana, On Stage, Stage, Cuff and Key, Houdini Unlocked, or The Challenge. Which did they choose? You'll have to wait until the next issue or find out!

But the real focus of this issue was "Houdini's Trunk No. 8." This was the trunk that traveled with Houdini and contained all his tools and "wherewithal for any sort of escape." The contents of the trunk were donated to the museum by Dr. Morris N. Young, and the newsletter contains a lengthy  article by Young penned for the December 1951 MUM describing in detail how he acquired the trunk from Hardeen's widow and its contents.

A search through the drawers revealed in orderly placement what proved to be mainly hardware supplies. No doubt the assemblage of materials represented years of trial and experience in being prepared for any contingency anywhere, anytime. There had to be no dependency on local shops or fancies, and secrets could not be revealed indirectly through purchase of specific supplies.


A second article by Ken Silverman called "More Houdini Trunks" discusses a written inventory of what Houdini's other traveling trunks contained, including a breakdown of Milk Cans he was using in  England in February 1911:

He had with him in England no fewer than four cans, described in the inventory as one "1910 New York Can," one "Dunston Challenge Can," one "Gamage Can," and one "Can 1910 unprepaired [sic]."


New items added to the HHC gift shop are discussed, including a glass etched Houdini portrait set on a walnut base with back lighting. Houdini's 1925 Christmas card is also reproduced.

In his "Backstage with Sid Radner" column, Sid discusses the upcoming first board meeting of the HHC and the new temporary exhibit, Houdini on Tour: The Traveling Magic Show, which featured the contents of Trunk No. 8. He again mentions a proposed Houdini stage musical, and that production of a new Houdini movie is "delayed for the couple of months." (This was the Ray Stark film which would never go before cameras.)

The newsletter concludes with a pitch for donations.