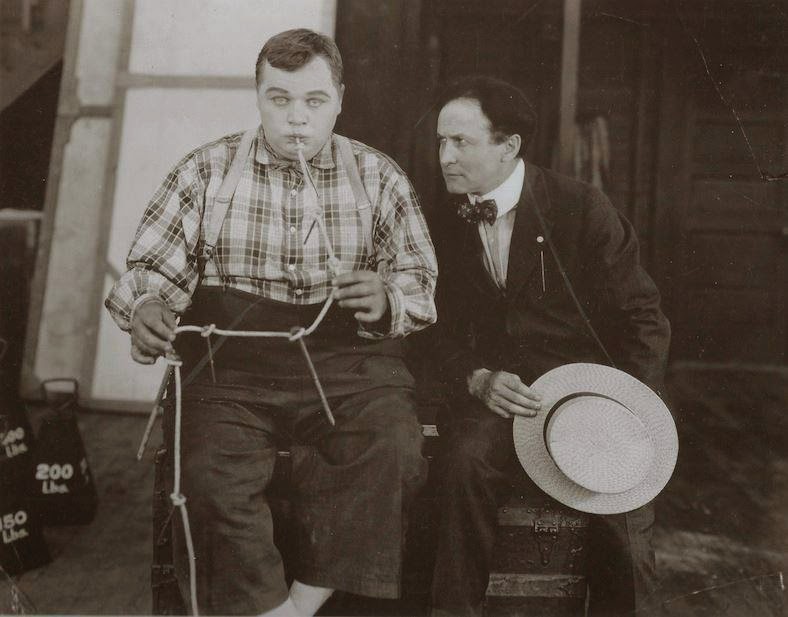 This photo of Houdini and comedy great Roscoe "Fatty" Arbuckle is well-known, but few know the story behind it. This photo was taken on July 27, 1919 at the Comique Studio in Edendale, CA during the production of Back Stage, a short directed by Arbuckle co-starring Buster Keaton. Houdini is using his hat to conceal a cast on his broken wrist.

Below is a newspaper account of a luncheon that followed. I'm pretty sure this oh-so-zany lunch only happened in the mind of the publicist who wrote this. Nevertheless, it's vintage silent era Hollywood hi-jinks, so enjoy.

Back Stage is available on YouTube. The Taylor (?) trunk and weights that can seen in the photo come into play around the 19 minute mark. Shame there's no cameo by Houdini!

Houdini and Arbuckle seemed to enjoy each other's company as Houdini visited the comedian again at the Henry Lehrman studio in Culver City later that same year, and Arbuckle was one of the guests at Harry and Bess's 25th Anniversary dinner at the Alexandra Hotel on June 22. And, of course, there was that Bebe Daniels gag.