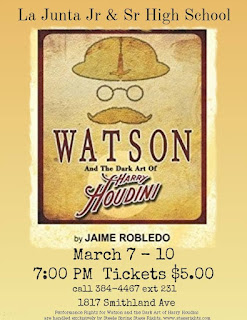 The drama department at the La Junta Jr. & Sr. High School in La Junta, Colorado is performing Watson and The Dark Art of Harry Houdini March 7-10.

Christian Montano plays Houdini with Alex Whitfield as Sherlock Holmes and Austin Kurtz as Dr. Watson. Says Montano, "It’s a good time! The cast works really well together since we’ve been doing this for so long... it’s like a family."

Watson and The Dark Art of Harry Houdini was written and directed by Jaime Robledo and had its debut at the Sacred Fools in Hollywood in 2013. (I reviewed it here.)

The La Junta Tribune Democrat has a nice profile of the play and students. Oh why didn't my High School drama class do this kind of thing!?