The saga of Houdini and Dr. A. M. Wilson

I've been so swamped this summer that I let an important Houdini 100th anniversary slip past. On June 15, 1916, Houdini appeared on the cover of The Sphinx, the official magazine of the Society of American Magicians. Why is this special? What's so unusual about the most famous magician of his time appearing on the cover of a popular magic magazine? Therein lies the story. 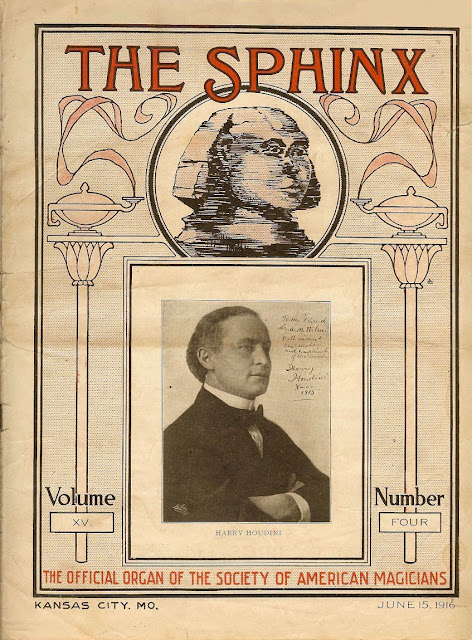 Houdini had a rocky relationship with the S.A.M. when he first joined the fledgling organization in February 1903. When he launched his Conjurers' Monthly Magazine in 1906, Houdini lobbied the S.A.M. to make it the new official organ instead of Dr. A.M. Wilson's The Sphinx. Apart from wanting his new magazine to have instant legitimacy, he also had personal reasons.

Dr. A. M. Wilson was an assistant and pupil to magician Robert Heller, who once performed for Abraham Lincoln. Wilson took over as editor of The Sphinx in 1904. Wilson was a magic traditionalist who didn't care for escapology in general and Houdini in particular. His magazine rarely mentioned the exploits of the Handcuff King, and when Houdini complained, Wilson simply reminded him that he could take out an advertisement at the normal rate.

When The Sphinx ran an (erroneous) report that the Western Vaudeville Circuit was going to relegate handcuff acts to their ten cent houses, Houdini blew his stack. Houdini lambasted Wilson, accusing him of "petty spite" and jealously and called him a "dog in the manger." Wilson countered: "Houdini is yet a young man with much to learn. I am sorry for him that money has become his god and self-conceit has caused him to idolize himself." He then vowed, "I will never again mention his name in The Sphinx, no matter how great the provocation."

Houdini had been having issues with the S.A.M., even beyond their support of The Sphinx as their official magazine, but this was the last straw. In the July 1908 issue of Conjurers he announced:

Harry Houdini has resigned from the Society of American Magicians, and is no longer a member. 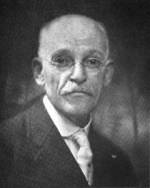 Houdini and Wilson continued their feud and The Sphinx continued to snub him. When Houdini folded his Conjurers Magazine, Wilson wrote that had been "inevitable" as the magazine "was intended primarily as an advertisement for the owner." He then took the gloves off:

Can anyone with a modicum of reason or common sense compare Houdini's or any other such act with that of David Devant, Servais LeRoy, F. E. Powell, Kellar or Thurston?

Magic is an art, a science that requires brains, skill, gentlemaness and talent of high order. Brick walls, torture cells, straightjackets, handcuffs, etc., demand nothing but physical strength and endurance, nerve, gall, bluster, fakes and fake apparatus, etc., ad libitium, heralded by circus band advertising. In my opinion, magic is brought into disrepute by all such. Their place is in the side show or dime museums.


The Houdini and Wilson feud extended to others. When Thurston asked Houdini for a $250 loan, Houdini reminded him that when they were both playing Chicago, Thurston invited Wilson to his show. "I told him to go to Wilson for the money." Houdini ended friendships if someone wrote for The Sphinx. He even darkly claimed to have a list of names of 300 married women with whom Wilson "was holding criminal relations as an adulterer and fornicator."

In June 1915, Houdini and Wilson came face to face in Martinka's Magic Shop in New York. It didn't go well. But a few months later, Dr. Theodore Blakesy, an amateur magician who admired both men, brought them together in his Kansas City office while Houdini was in town. And hour later the two men emerged arm and arm, bonded by a mutual love and knowledge of magic.

"I apologized to Houdini; he made amends," said Wilson. "Now we are friends, as we should have been years ago." 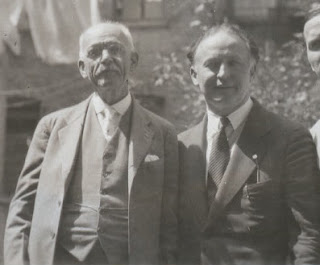 At long last, Houdini appeared on the cover of The Sphinx that following June. The cover photo includes the inscription: "To My Friend Dr. A.M. Wilson. With sincerest best wishes and compliments of the season. Harry Houdini Xmas 1915." For the magic world, this was an announcement that the long feud was finally over.

In his column, Dr. Wilson explained:

I made a mistake in accusing Houdini of attacking me, and did not discover the mistake until last June, when I made ample and satisfactory apology to Mr. Houdini, since when we have been good friends and he has sent me a two-year subscription, and, as you see, has his picture in this Sphinx.


The profile of Houdini in the magazine itself (likely provided by Houdini) is a praise-fest, even by Houdini standards. Headlined "Houdini (Has legalized the name)", it plays 16 years of catch-up, ticking off Houdini's triumphs one by one. Among those is a claim that I don't think has ever appeared anywhere else:

Inventor of the Wardrobe Trunk, for which he never received any royalty, and which is now being made by almost every trunk firm that tries to be up-to-date.


Wilson's acquiescence to Houdini was so total (and so one-sided), that it makes me wonder if the reconciliation might have been forced on him by the S.A.M. in a bid to pacify Houdini and bring him back into the organization. Indeed, Houdini would rejoin the S.A.M. the following year and become its president, building the club into the national magic organization that it is today.

But even if the friendship was initially forced, the men did genuinely get along from this point forward. Wilson even became somewhat of a father figure to Houdini. In the 1920s, Houdini arranged a lavish S.A.M. banquet, and as part of the evening's entertainment, he surprised the magicians by "teleporting" Dr. Wilson, then in his 70s, from Kansas City to New York via a "radio" cabinet (possibly the genesis of his later Radio of 1950 illusion). In 1926, Houdini enlisted Wilson's help in drawing up the curriculum for his proposed University of Magic. He even gave Wilson a key to his home so he could come and go as he liked. 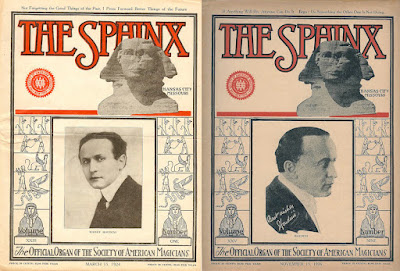 Houdini appeared on the cover of The Sphinx again in 1924 and after his death in 1926. In that November issue, Wilson wrote:

I knew his heart, his longings, desires, ambitions, all were noble and uplifting. I would that every one could have learned to know him as I did after our reconciliation. There is no one to take his place in the hearts of one who knew him; no one to fill the void in the world of mystery.


Dr. A.M. Wilson remained editor of The Sphinx until his own death in 1930.

Thanks to Arthur Moses for providing Dr. Wilson's May 1908 editorial. Sphinx cover images from my own collection.