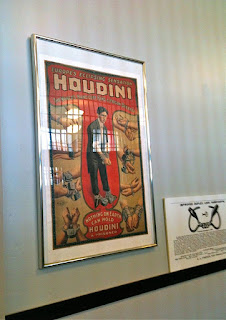 Today I went to the Los Angeles Police Museum near Pasadena to see their special Black Dahlia exhibit (the life and death of Elizabeth Short is one of my side obsessions). But what did I see on first entering the museum? A poster of Houdini! There's just no escaping this guy.

The poster is not an original. It is one of a limited run of 500 put out by Rosebush Enterprises in 1991. Because it was hanging in the old cell block of what was once a real police station, I hoped this meant Houdini might have escaped from one of the cells. However, the Highland Park Station, as it was originally called, was built in 1925, so this isn't the case. The poster is just there as part of a wall display illustrating period handcuffs and restraints.

There's actually another Houdini connection with this museum. Our friend Joe Fox's handcuff collection is normally on permanent display here. But at the moment the Dahlia exhibit is using the display cases.