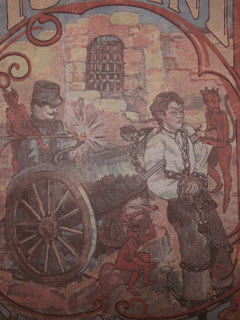 Steven Bingen, author of MGM: Hollywood Greatest Backlot and the Warner Bros. archivist who helped me uncover RKO 589, has shared another discovery. While taking a tour of the historic Melody Ranch Motion Picture Studio in Newhall, CA, Steve spotted this Houdini poster in the studio museum. The poster shows Houdini lashed to a cannon with the word "Challenge" beneath.

It's tantalizing to think this might be an actual Houdini poster, but the style and size almost certainly precludes this (dang-it). Still, it's an intriguing piece. Houdini did accept a challenge by four Navy petty officers to escape from the mouth of a loaded cannon in England in 1911, and he was tied in very much the same manner as we see depicted the poster, right down to having a rifle inserted behind his back. (Publicity for The Grim Game claimed this challenge took place in Pershing Sq. in Los Angeles.)

However, the cannon escape is one of Houdini's more obscure challenges. There are no photos (that I know of), and only one drawing (in Gibson's The Original Houdini Scrapbook, p. 211). So this is not artistic fantasy. This required research. But for what purpose?

It's possible this poster was made for a movie or TV show shot at the Melody Ranch studio. That's what this museum is all about. But what movie? And while this is not a real Houdini poster, could it be based on a real poster image? Houdini did use imps on his prison cell and barrel mystery poster, so it's not usual that we see imps in action here (I love that one is lighting the fuse). But that's probably wishful thinking.

I've always wondered why Houdini didn't make more of this challenge in his publicity. It's certainly a dramatic image. But maybe he didn't want to encourage a repeat. In the original challenge letter, the officers specified that he escape in the allotted 20 minutes or "be blown to Kingdom Come."

Thanks to Steve Bingen for sharing his photos and his find.