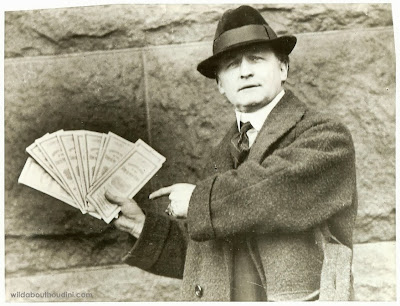 Recently I won this original UIP press photo on eBay for the opening bid of $4.99. I'm not sure how this happened because this is an image of Houdini that I don't believe has ever been published in any book, and typically unpublished press photos like this capture a premium. But I'm not complaining!

Not only is this a nice photo of Houdini in his streets clothes, but he's holding $10,000 in Bonds to illustrate his open challenge to spirit mediums. Here's that challenge as it was advertised on Houdini's publicity material:

HOUDINI
will wager the above mentioned sum, the money to go to charity if the spiritualists will produce a Medium presenting any Physical Phenomena that he cannot reproduce or explain by Natural means.

CONDITIONS
The medium must present the manifestation 3 times in the presence of Houdini and the selected committee.

In an earlier version of the Challenge Houdini added that he would surrender the money if any medium could duplicate his own feats "by their alleged mediumistic powers." He even once offered $5000 to Harvard professor and Margery supporter, William McDougall, if the professor would allow himself to be nailed into a packing crate and thrown into the Charles River.

Houdini told the press, "I assure you that Professor McDougall's friendship with Margery and all her spirit controls will not get him out of the box before he drowns."

Needless to say, Houdini held onto his money.