Last night I had the pleasure of attending The Last Houdini Seance performed by the Big Party Show at Three Clubs in Hollywood. It was a very funny show put on by a talented group of young comedians that was raucous while still respectful to Houdini.

The show found Bess Houdini (Rebecca Warm) and her put-upon new husband "Phillip" (Steve Szlaga) gathering a group of fellow eccentrics for the Final Houdini Seance in 1936. Each character took the stage for an individual comedy sketch (I'm assuming of their own creations). It was a great showcase of young talent before a full house, and clearly some research had been done (especially on the part of Rebecca). And what fun it was to be among an audience chanting "Houdini! Houdini!" just blocks away from where the real seance happened in 1936. Houdini never dies in Hollywood.

The troupe even engineered a spooky finale in which they feigned technical problems and left the audience sitting alone in the dark... only to have Houdini come back for one last big scare.

Congrats to all the performers on a terrific show. 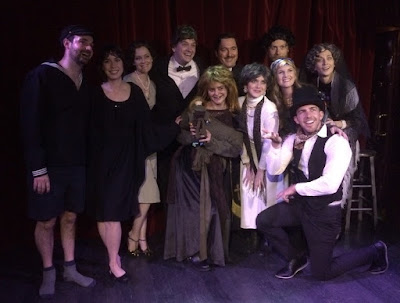