The Big Party Show is putting on a Houdini-themed Halloween comedy show on Monday, October 22, at The Three Clubs in Hollywood. Below are details. 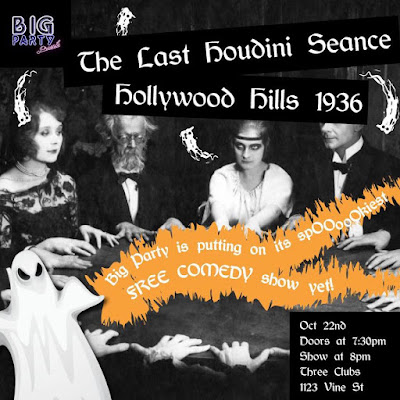 Just in time for Halloween, Big Party is putting on its spOOooOOkiest FREE COMEDY show yet!

Tinsel Town elite, paranormal experts, and revelers of the macabre have all descended on the Knickerbocker Hotel with the same goal. To try to contact the spirit of Harry Houdini one last time.

**This is a comedy show. Not a real seance. You might not think this disclaimer is necessary but hey, it's Hollywood. You never know."


The event is $1 at the door or free online. You can reserve a ticket via Eventbright. For more information check out the Facebook event page.