Did Houdini's furniture sell on eBay in 2007?

In March 2007 a set of two chairs and a settee said to have belonged to Houdini sold on eBay. Below are photos and the intriguing original auction description. 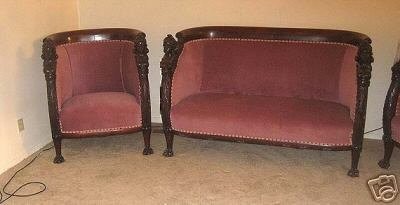 An original Karpen Bros., (Houdini?) settee and chair made in the Victorian 1800-1900s era. I will do my best to describe this. It is hand carved from mahogany wood and has been reupholstered in mauve velvet. When it was reupholstered the original Karpen Bros. tags were removed and never put back on. Why? I don't know. I don't know where they went to. It originally was a deep red leather that had become torn. The arms are Goddesses w/victor helmets on their heads. The eyes of the Goddesses had red stones in the eyes but were taken out in later years. The settee measures 57" long x 36" high, the chair measures 36" wide x 20" high, both are 22" deep from front to back. The pair has never been set on since it was reupholstered. Used for decorative purposes only. 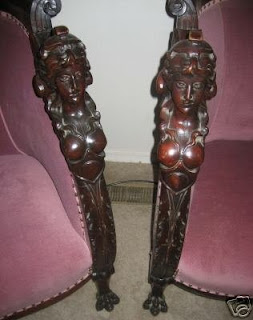 This is the story on this set. My girlfriend, whom I am selling this for, now owns the set. Her mother, (who is still living), and father were in show business back in the 1900s. They had met Houdini and had their picture taken with him when he was sitting in this chair. He had the set commissioned and the Goddesses are supposed to be replicas of his mother. They fell in love with the set. In 1946 her parents saw the set was on the auction block at Cameron's Auction House on Ohio St. in Chicago, Ill. and they bid on them, winning the bid.

Some years later they took pics and sent them to Sotheby's for authentication. They could not authenticate that they had actually belonged to Houdini. My girlfriend's mother says it definitely came from Houdini but I can't verify it, only her word. All in all they are quite exquisite. The price is for the pair. Please ask any questions before bidding as all sales are final.


The chairs appear to match the one seen in Houdini's famous ectoplasm photo (below), so there might be something to this. If anyone has any information on what became of these, please contact me or leave a comment below. 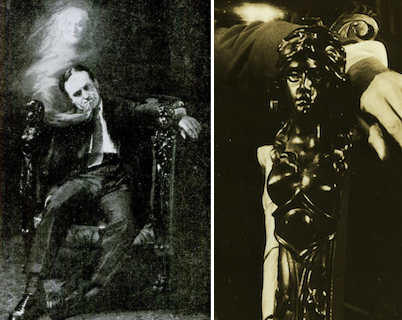 Email ThisBlogThis!Share to TwitterShare to FacebookShare to Pinterest
Tags: 278, Auction