The amazing afterlife of Harry Houdini 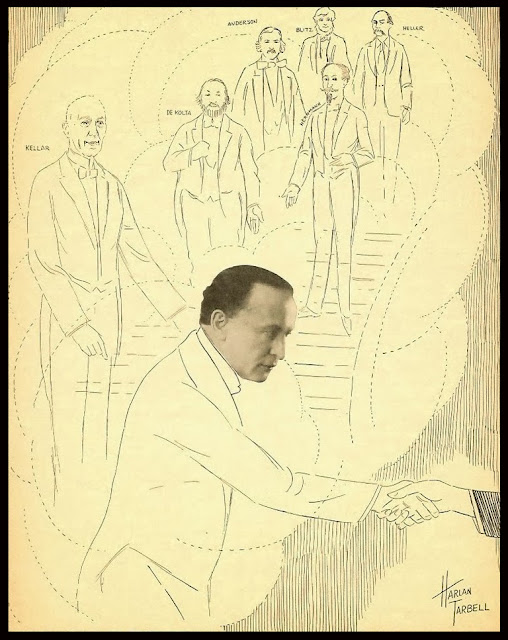 Today marks the 92nd anniversary of Houdini's death on Halloween 1926. But today also marks the start of Houdini's amazing afterlife, in which he not only continued to be the most famous name in magic, but grew to become one of the most famous individuals of the entire 20th century. So what has carried Houdini's name and fame aloft for 92 years?

Houdini continued to make headlines even after his death, with news of his collection being donated to the Library of Congress and Bess's battles with insurance companies. Houdini's act also lived on with Hardeen coming out of retirement and touring as "Brother and Legal Successor of Houdini." And, of course, there was the infamous Arthur Ford séances which caused a sensation in 1929. 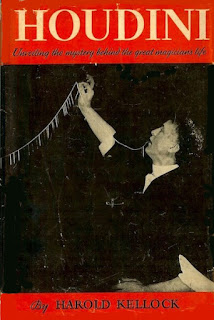 But perhaps the most important first step in cementing Houdini's legend was the serialization and publication of Houdini His Life Story by Harold Kellock, the first major Houdini biography. With its mix of fact and fiction, the Kellock book established how the Houdini story would be told for decades.

Other books quickly followed. The Secrets of Houdini by J.C. Cannell traded on the continued fascination with Houdini's secrets, as did Houdini's Escapes and Houdini's Magic by Walter B. Gibson. Houdini and Conan Doyle: The Story of a Strange Friendship by Bernard Ernst and Hereward Carrington became the first specialized Houdini study in 1932. The first news of a Hollywood biopic also surfaced in the '30s, with papers reporting that both RKO and Columbia were developing movies based on the life of the great magician.

Houdini was again in the headlines in 1936 with The Final Houdini Séance in Hollywood. This was Bess Houdini and Edward Saint's greatest tribute and most successful publicity getter. Two years later Bess appeared as herself in the film Religious Racketeers. But even without Bess and Ed, Houdini's name never left the news. In 1939 it was widely reported that a plumber trapped for 10 hours in a cave-in credited his survival to remembering Houdini's writings about the Shelton Pool Test.

In 1941, Walter Winchell shared "A Few Untold Facts about Harry Houdini" in his popular national column. Genii Magazine continued to release an annual "Houdini Memorial Issue" ever October. The '40s also saw publication of The Great Balsamo by Maurice Zolotow, which professed to be a tell-all tale of Houdini's life. Then, in 1946, a group of thirteen magicians, headed by Karrell Fox, held a seance in Detroit for the 20th anniversary of Houdini's death. The event caught the imagination of the media and was widely reported on. The following year, both Joseph Dunninger and Harry Blackstone held competing Houdini Seances on Halloween, kicking off the annual Houdini Seance tradition that continues to this day. After Hardeen's death in 1945, his former assistant and successor Hardeen Jr. (Douglas Geoffrey) toured with "Houdini Lives Again!" Then in 1950, The Great Houdini by Beryl Williams and Samuel Epstein was published. The book would become a gateway to the Houdini story for many kids as it was published by Scholastic and became a staple of grade school libraries. It was also in the 1950s that another seminal event occurred when Paramount released Houdini starring Tony Curtis and Janet Leigh. Both the Curtis movie and Epstein book helped spread Houdini's name and fame for decades to come. 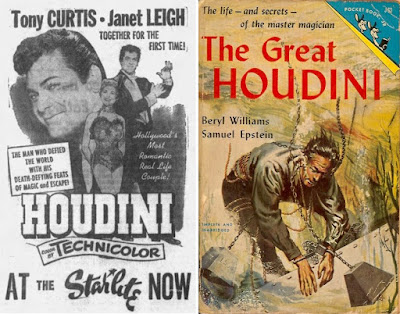 Houdini The Man Who Walked Through Walls by William Lindsay Gresham became the next important Houdini biography. The book took a big step in correcting many of the myths born in Kellock, while creating a few of its own. The feature documentary Days of Thrills and Laughter reminded audiences of Houdini's film career. John Kennedy even called Richard Nixon a "Houdini" in the final days of the 1960 Presidential campaign. The quip drew national coverage. 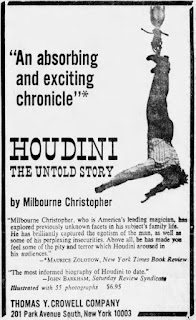 On January 30, 1965, Paramount's Houdini aired on television for the first time. It became a perennial programer and brought Houdini's story to a new generation (including me). The '60s also saw a London musical, Man of Magic, and the opening of the Houdini Magical Hall of Fame in Niagara Falls, Canada. The end of the decade brought the publication of Houdini The Untold Story by Milbourne Christopher, still one of the best and most accurate Houdini biographies ever written.

The first Houdini documentary, The Truth About Houdini, aired on the BBC in 1970. Arno Press reprinted Houdini's A Magician Among the Spirits, and the S.A.M.'s Houdini Birth Research Committee's Report officially recognized Houdini's birthplace as Budapest. As the centenary of Houdini's birth drew near, newspapers widely reported a rumor that a box containing all his secrets would be opened. That never happened. But Doug Henning did open The Magic Show on Broadway, and when he did Houdini's Water Torture Cell on live television in 1975, it launched a second Golden Age of Magic and an explosion of interest in Houdini. 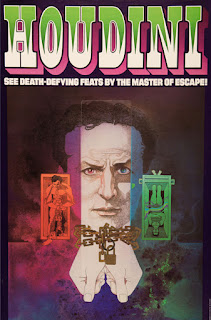 Houdini was inescapable in the mid 1970s. He appeared as a character in the #1 bestseller Ragtime. A new biopic, The Great Houdinis, aired on ABC. The Warren Paper Company put out a Houdini poster that has become iconic in its own right. A legion of new books and reprints appeared. Houdini received a star on the Hollywood Walk of Fame. And the mysterious destruction of his grave bust was big news. Even Fonzie did the Milk Can escape on Happy Days.

The 1980s saw the documentary Houdini Never Died air on a nascent HBO. A new biography, Death and the Magician: The Mystery of Houdini by Raymund Fitzsimons was published. Appleton dedicated its "Houdini Plaza", and Disney aired Young Harry Houdini. The decade also saw the start of a trend in Houdini fiction that continues to this day, with Houdini meeting everyone from Sherlock Holmes to Dracula.

The Houdini Historical Center in Appleton became a center of Houdini study and activity in the 1990s. Houdini (1953) was finally released on VHS amid talk of a new Houdini biopic, this time starring Tom Cruise. The Life and Many Deaths of Harry Houdini by Ruth Brandon hit bookstores. Houdini: The Great Escape aired on A&E's Biography, kicking off a wave of half-hour Houdini documentaries on similar shows. Then, in 1996, Houdini!!! The Career of Ehrich Weiss by Kenneth Silverman was published, setting a new bar for Houdini biographies that has yet to be matched. The '90s also saw FairyTale: A True Story with Harvey Keitel as Houdini, and the TNT Original movie Houdini starring Johnathon Schaech. 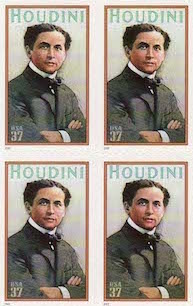 Houdini arrived in the 21st Century as a first class postage stamp. He also appeared as a character in the bestselling Carter Beats The Devil by Glen David Gold. Then came The Secret Life of Houdini: The Making of America's First Superhero by Bill Kalush and Larry Sloman. The book blurred the lines between biography and Houdini fiction with tales of Houdini working as a spy. Hollywood was the only one who bought it, and promised a series of action-packed Houdini spy movies (which have yet to appear). One movie that did appear was the equally fanciful, but far less action-packed, Death Defying Acts with Guy Pearce.

In a welcome return to real Houdini history, the centenary of Houdini's historic first flight in Australia was celebrated in Diggers Rest in 2010. That same year saw the Houdini Art and Magic touring exhibition open in New York City. Then on November 10, 2010, WILD ABOUT HARRY was launched.

These past eight years have seen some 3922 posts, each one in their own way attesting to the continued popularity and fascination with Houdini. This year alone has seen three major museum exhibitions and a myriad of special events, including 4 seance events today. Next year will see the release of a major new book by Joe Posnanski, the title of which was revealed on Amazon just this week. Appropriately enough, it will be called, The Life and Afterlife of Harry Houdini.

So on this 92nd anniversary of his death, it has never been more clear...