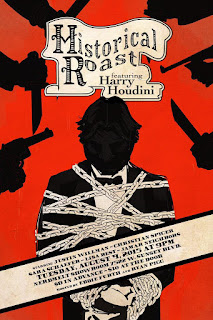 On Tuesday I had the pleasure of attending the "Houdini Historical Comedy Roast" at the NerdMelt Showroom in Los Angeles. Comedians Eddie Furth and Ryan Pigg are the brains behind these clever historical roasts ("Teaching history a lesson"), and it was one wild night! From race to the Holocaust to every form of sexual insult aimed against one's mother, nothing was off the table. From start to finish it was a free-for-all of rapid-fire comedy insults both onstage and off. Not only was it a blast as a Houdini event, but it was exciting to experience this cutting edge of the L.A. comedy scene.

The NerdMelt showroom, located in the back of Meltdown Comics on Sunset Boulevard, was hot and near capacity with a mix of regulars and first timers drawn in by the Houdini name (even the great Max Maven was in attendance). Things kicked off at 9pm with hosts Eddie Furth (@EddieFurth) and Ryan Pigg (@RyanPigg) giving an introduction and taking Houdini trivia questions from the audience. The prize for stumping them were assorted Fleshlights (look it up). However, I knew they were in trouble when they were stumped by the question: "What was his wife's name?" The fleshlights went fast and, no, I did not ask a question (but I had one chambered). 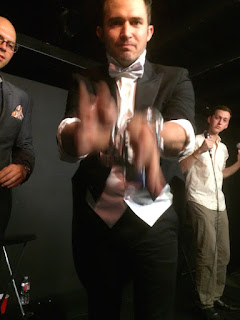 It was then time for the man himself, The Great Houdini, to take the stage! Houdini was played by talented comedian and magician Justin Willman (@Justin_Willman), who made his entrance in chains and period tux. For my money, Justin was a dead ringer for Houdini in his younger, handsomer Handcuff King days. I mean, check this out.

The first comedian roaster up was Sara Schaefer (@saraschaefer1), who fretted that her audience was divided between people who knew absolutely nothing about Houdini and people who knew way too much ("Bunch of know-it-alls!"). Sara joked about the ridiculous complexity of the coded message Houdini arranged between himself and Bess. But she scored her biggest laugh by poking fun at people who spend all their time at The Magic Castle, several of whom were in the audience. She was terrific.

Next came the talented and ultra cool Jamar Neighbors (@JamarNeighbors). Jamar's act was loose and less about Houdini and more about magic. Funny moments were when he pointed out that his sister was "scared of magic" and that "Illusionist" was just magic speak for "arrogant magician." Said Jamar, "If I ever call myself a 'Humorist', you can sock me in the face." It was a slow burn of an act that drew one in for the kill, and I got a feeling I was seeing a future comic star on stage 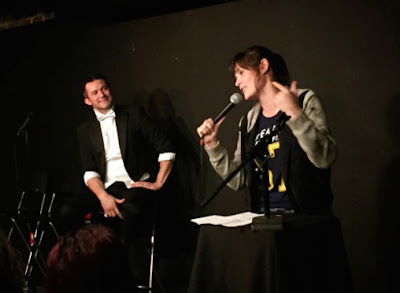 Then came the absolutely hysterical Lisa Best (@lisabestcomedy) who set the room on fire with her insane persona. Lisa played the part of a somewhat dim roaster (repeatedly telling Houdini that his dead parents "HATED YOU!"), but I could tell she did the most research of them all. Lisa pulled out some obscure information, such as the fact that Houdini's sister Carrie Gladys was blind: "NOT BEING ABLE TO SEE WAS THE BEST PART OF BEING YOUR SISTER!" She relentlessly and sometimes irrationally zinged Houdini/Willman, who struggled to keep a straight face during her set. She was magnificent.

Host Eddie Furth then took the stage. He pointed out that Houdini was the first person they've roasted who "wasn't an entire dick." He said the more he researched, the more he realized Houdini was "a really great guy." I liked that. 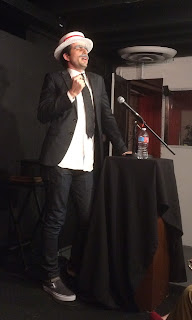 Eddie then introduced a surprise guest roaster who didn't think Houdini was such a great guy: Sir Arthur Conan Doyle! Doyle was played by Christian Spicer (@spicer), who came out wearing a straw hat and bushy grey eyebrows and mustache (which he sweated off before the end of his set). Doyle was enraged and foul-mouthed and raved about spiritualism being the only explanation for phenomena such as David Copperfield's ability to score with supermodels. He also brought up the Houdini Museum in Scranton, commenting on how it was advertised as the only building in the world entirely dedicated to Houdini. "That seems about right!" He was very funny, and having Doyle appear as a surprise roaster was an inspired idea.

It was then Houdini's turn to roast his roasters, and Justin knocked it out of the park. ("Tonight might be the first time I jump off a bridge after a show.") During his very funny set, Houdini not only took down his fellow roasters, but leveled shots at modern pretenders: David Copperfield, David Blaine, Penn & Teller and Criss Angel. He also did a card trick for Conan Doyle that was so filthy I won't describe it, but the climax might have been the funniest moment of the entire roast. He then concluded the evening with a demonstration of the Spirit Slates (a favorite trick of the real Houdini), in which the spirits sent a clear message to the room that you can read below: 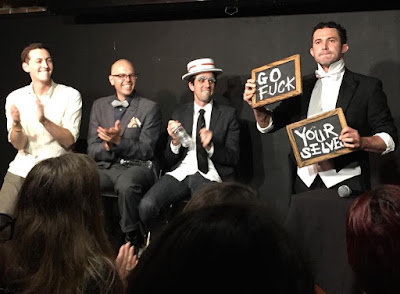 The topic that the comedians singled out the most was Houdini's death by appendicitis (it was part of every set). His height, looks and religion also came in for some repeated fun. So did the various names he used throughout his career, such as King of Cards and The Prince of Air ("MORE LIKE BEING THE PRINCE OF BEING A DIPSHIT!" - Lisa Best). Adrien Brody also came in for a few choice insults.

After the show, I was happy to get a photo with Willman/Houdini (and his slates), and Eddie Furth allowed us to strip the room of their Houdini Historical Roast posters, so all the Houdini Nuts in attendance (Lisa Cousins, Joe Notaro, Joe Fox, Bullet Valmont) got to take home a nice souvenir.

All in all, this was one of the wildest and most unique Houdini events I've ever experienced. I had a blast.

You can keep up with the latest Historical Roasts via Facebook and Twitter. Roasts are also posted on their YouTube channel. The next Historical Roast subject will be Michael Jackson on September 1st.