Come hear me speak and see The Grim Game in Baltimore, Nov. 4

On Sunday, November 4th, I will be giving a talk on "Houdini in Hollywood" and screening The Grim Game at The Jewish Museum of Maryland. Below are details.

It's not generally known that the great magician and escape artist Harry Houdini was also a pioneer of early cinema. Houdini filmed many of his death-defying escapes, starred in several films, and even ran his own motion picture studio. Now Houdini historian and blogger John Cox tells the amazing story of Houdini’s involvement in early cinema. Highlights include the true story of a plane crash caught on film during the making of his most successful movie, The Grim Game. The talk will include dozens of rare photos and film clips of the legendary Harry Houdini in “Action!”

At 2pm join us for a screening of The Grim Game, starring Harry Houdini.


Being able to see The Grim Game is now a rare treat. The movie never did materialize on DVD and has never repeated on TCM. So it remains the hardest of all of Houdini's movies to see. And if you need an extra inducement, know that during my talk I will show the recently discovered lost overboard box footage from Terror Island.

The Jewish Museum of Maryland's exhibition Inescapable: The Life and Legacy of Harry Houdini runs through January 21, 2019. For more information and a full list of upcoming events visit their website. 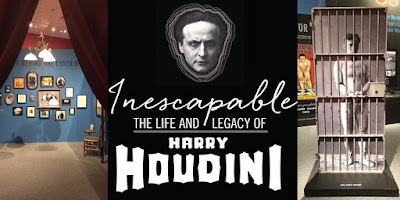