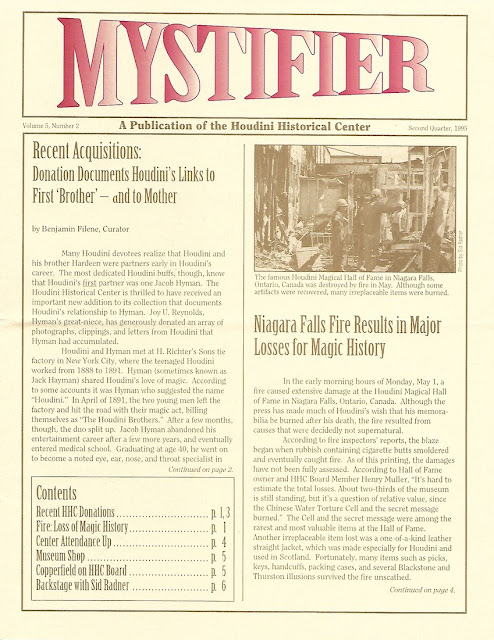 The Second Quarter 1995 Mystifier opens with the news that a collection of photographs, clippings, and letters related to Houdini's first performing partner Jacob Hyman was donated to the HHC by Joy U. Reynolds, Hyman's great-niece. (As this was not part of the Radner collection, presumably the material is still held in Appleton.) That's the good news.

The bad news is a report on the catastrophic fire at the Houdini Magical Hall of Fame in Niagara Falls on May 1, 1995. The newsletter gives a good accounting (better than press reports at the time) of what was destroyed:


According to fire inspectors' reports, the blaze began when rubbish containing cigarette butts smoldered and eventually caught fire. As of this printing, the damages have not been fully assessed. According to Hall of Fame owner and HHC Board Member Henry Muller, "It's hard to estimate the total losses. About two-thirds of the museum is still standing, but it's a question of relative value, since the Chinese Water Torture Cell and the secret message burned." [...] Another irreplaceable item lost was a one-of-kind leather straitjacket, which was made especially for Houdini and used in Scotland. Fortunately, many items such as picks, keys, handcuffs, packing cases, and several Blackstone and Thurston illusions survived the fire unscathed.


Dr. Morris N. Young then writes about meeting Dorothy Young, and how, on his suggestion, she painted a portrait of Houdini "as she has seen him in 1926." Dr. Young says the painting was donated to the HHC for display. I don't believe I've ever seen this, but would love to!

The newsletter also includes a report on rising attendance, and that David Copperfield has joined the HHC Board. Among the "New Members" listed is one John Cox. (What took me so long?)

Sid Radner devotes the first part of his "Backstage" column to the Hall of Fame fire. He says that a planned auction of several of the illusions housed at the museum will no longer go forward. He also writes that "the loss of the Water Torture Cell could present a fresh opportunity to lobby for  Houdini postage stamp featuring the cell."

Sid then notes that James Bond author John Gardner is a member of the HHC. He reports that the HHC was recently mentioned on Jeopardy!, and that Houdini's connection to Appleton was included in the April 4, 1995 New York Times crossword. He also announces the upcoming publication of "a very important limited edition book explaining how Houdini came to America", and that there will be a new restaurant chain similar to the Hard Rock Cafe with a Houdini/magic theme.