There appears to be a new twist in the saga of Bess Houdini's famous Royal Crown Brooch. The following excerpt is from a profile of video game developer (and Cardini relation) Randy Pitchford at the website VG 24/7 [Clowns, Houdini, and a vanishing teenager – the Borderlands developer isn’t your regular video game studio]:

Pitchford’s great uncle is Richard Valentine Pitchford, a prominent magician in the early 1900s who went by the stage name Cardini. Cardini was so influential that there is an exhibit dedicated to him at the Magic Castle in Hollywood. “All the props on display in the exhibit are artifacts that my wife and I left to the Academy of Magical Arts for the museum display,” Pitchford tells me. Pitchford himself is also a prominent member of the organization.

Recently, Pitchford and his wife, Kristy, were at a pyjama party with the Magic Castle’s founder, Milt Larsen, in Santa Barbara. Milt Larsen’s wife, Arlene, decides she wants to turn Kristy Pitchford into a queen, so she pops a bejewelled tiara on her head and drapes a brooch around her neck. “After all this goes down, Arlene explains that, ‘that broach that I put around your neck, it once belonged to Bess Houdini’,” Pitchford remembers.

“The story is, that brooch was given to the Houdinis by the Tsar of Russia, Nicholas the II, when he invited them to Moscow in the hopes to recruit Harry Houdini to be his mystical advisor. Harry Houdini didn’t take the job, the job was taken by Rasputin, and we know how that turns out.”

A while after the party, the Larsens put the brooch up for auction to raise money for a Magic Castle cabaret in Santa Barbara, but Pitchford can’t make it to the auction. The piece is estimated to reach $30,000, so he puts in a proxy bid for $55,000. The brooch goes for $60,000. The buyer? David Copperfield.

“So David calls me a few months later, because a magician had posted a story on the Academy of Magical Arts Facebook page linking to an article about Bess Houdini,” Pitchford explains. “In the article she talked about her visit to Moscow, but the dates she mentioned were discrepant with what historians know. So, what if the whole Nicholas the II story, and the Tsar of Russia, was bullshit? These are the Houdinis, great self promoters. What if this was a story invented?”

Pitchford didn’t care if the story was fabricated, though. He cared that it belonged to the Houdinis and made his wife happy. Copperfield said he could have it for his buying price: $72,000, with fees. “He’s like, can you bring cash?,” Pitchford laughs. “I’m about to get on a flight to Vegas because I’m working with Penn and Teller on a VR project – Penn and Teller’s VR: Frankly Unfair Unkind, Underhanded and Unnecessary. it’s effectively a collection of VR magic tricks.

“It’s February 11, I’ll pick up the brooch and give it to my wife on Valentine’s Day. I have a briefcase loaded with $72,000, and because of the timing of the day, I don’t have time to drop it off at a safe. I’m going to the P&T theatre, and the security guy needs to see inside the case. Incidentally, there was another magician with me, whose stage name is actually Handsome Jack. His name predates Handsome Jack the video game character. He’s just laughing his arse off because he knows what’s in the briefcase. So I open the case and the security guard reacts like Marcellus Wallace opening his briefcase in Pulp Fiction.”


As the above suggests, the story of the brooch coming from Tsar Nicholas II is questionable (I suspect the Facebook link it talks about was this one). It's much more likely that it came from Grand Duke Sergei Alexsandrovich, whom the Houdinis performed for in Moscow in 1903 and who gave them gifts. Even Gerrie Larsen said as much in 1952. But over time and retellings, the Grand Duke became the Tsar. But who can keep Russian royalty straight anyway?

But it's great to know that the brooch has now landed with the Pitchfords and continues to live among magic royalty. 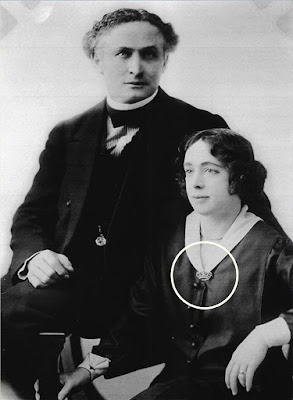