In 1946, Maurice Zolotow penned The Great Balsamo, a novel about a famous magician and escape artist. Even though the author states in his introduction that his character "is not a lightly doctored version of any famous magician," the similarities between Barney Balsamo and Harry Houdini are hard to escape. 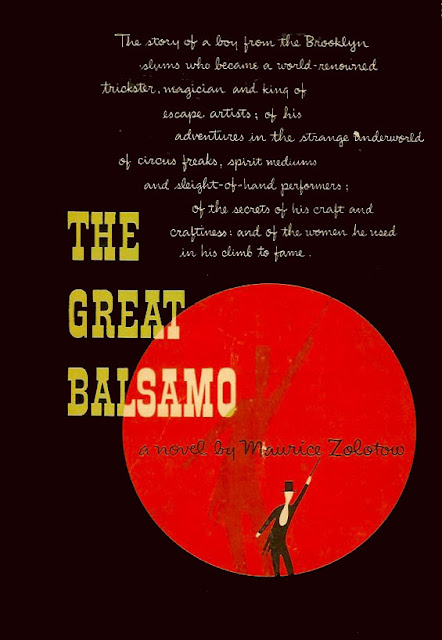 The Great Balsamo was first published in hardcover by Random House in 1946. It later appeared as an abridged paperback edition from Pyramid in 1954. I admit I've never read the book cover to cover. I've only scanned it. But even a scan tells me that Houdini was first and foremost on Zolotow's mind, and that he intended Houdini to be on the mind of the reader as well. Consider his description of Barney Balsamo in the first chapter:

He was not of commanding height, but when be began to speak in a firm, harsh voice, ungrammatical, but pervaded with unanswerable conviction, he could project any illusion about himself which he wished.

At the high point of his fame, Balsamo was a stocky muscular person with a large round face, curly black hair, and eyes of a murky marbled grayness, that fixed you with an immobile translucency. You were unable to escape from the eyes. They captured you like and insect on a scientific pin. You were lost in the eyes, like round, superbly polished stones in a ring, cloudy chrysophrase stones. Before an interview or a stage appearance, he placed a few drops of belladonna in his eyes to heighten the staring intensity.


The similarities continue. Balsamo, who doesn’t drink or smoke, performs with his wife Lami as The Balsamos. Their signature trick is the substitution trunk. When times get hard, they do a spiritualistic mind reading act that uses a word/number code. Zolotow spells out their code on pages 184-185 in a way that is very reminiscent of how the first Houdini biography, Houdini His Life Story by Harold Kellock, spelled out Harry and Bessie's own secret code.

In fact, it's pretty clear that Zolotow used the Kellock biography as a source in ways that border plagiarism. Compare these two passages from Kellock and Zolotow:

Toward the end of the week he came home one evening with a whole packing-box for the fire. It was so complete that he obviously hated to break it up, and before tackling it he sat for a long time staring at it. At last, with a sigh, he began to wrench it apart.

"Bess," he said, "I have a new idea for a packing-box escape. I think I can get out without using a trick box. I'll work it out some day, and it will help make us famous.

In this curious fashion the idea of his famous packing-case escape had it's inception.

Lami could not help giggling when she saw what an absurd figure he made hauling the crate. It was the first time he had ever secured a box in such unbroken condition. He seemed to be reluctant to break it up and throw it into the stove. For a long time he stared at the box, and thumped its sides, examining the way the slates were nailed together. Finally, he began to dismantle the box.

"Lami," he said, thoughtfully, "I have a new idea for a packing-box escape. I think I can get out without using a trick box. I think I know a way where I can get a committee of carpenters to come on stage and build a box right on stage and nail me into it and I can escape and still leave the box it its original condition.

This was the germ of Balsamo's celebrated packing-box escape...


The similarities continue. Advised by vaudeville manager Sam Blitzer to focus on handcuffs escape, Balsamo hits it big as "The Handcuff King and Jail-Breaker." He travels to Europe and escapes handcuffs at Scotland Yard -- yes, his hands are locked around a pillar -- and experiences his own Hodgson-like challenge. (Both these sections again lift whole passages from Kellock). Back in the U.S., Balsamo performs suspended straitjacket escapes, vanishes an elephant, and is devastated by the death of his mother. In the end, Balsamo dies in an overboard box escape gone wrong. 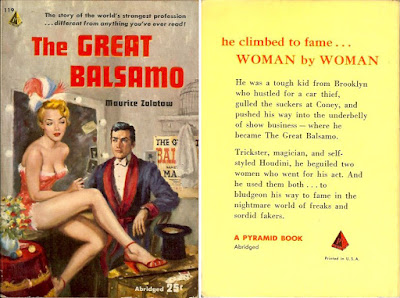 The Great Balsamo is peppered with mentions of classic era magicians such as Thurston, Blackstone, T. Nelson Downs, and Horace Goldin. Zolotow also identifies S.W. Erdnase as being Edward Samuel Andrews. The name "Houdini" is conspicuously absent until near the end of the book when he warrants one quick mention (his photo is named among others on the wall of a magic shop).

It's also worth noting that Houdini himself used the name "The Marvelous Balsoma" for a fictional magician in his short story, "The Magician's Christmas Eve." Houdini was no doubt drawing the name from Cagliostro, who also happens to be a hero to Barney Balsamo.

So there's no question Zolotow is offering is a veiled portrait of Houdini in The Great Balsamo. However, it's not always a flattering one. Consider this passage near the end of the novel:

"Balsamo, growing older, resembled Cagliostro more and Balsamo less. In both, cunning and evil had gradually come to dominate and corrupt the physiognomy."


So who was Maurice Zolotow and what were his feelings toward Houdini?

Born in 1913, Maurice Zolotow was a prolific show business biographer. He penned the first biography of Marilyn Monroe, as well as biographies of John Wayne and Billy Wilder. He was also a magic buff who claimed to have seen Houdini perform at Coney Island. Later in life, he became friends with magician Ricky Jay.

In October 1979, Zolotow wrote a profile of Houdini for Los Angeles Magazine. It's surprisingly negative. He starts with an account of the Jess Willard confrontation and concludes: "All of Houdini's biographers relate this and similar stories about him, as if to prove what a heroic guy he was. To me, it suggests he was an arrogant bastard."

Zolotow goes on to quote conversations with Dai Vernon, a Houdini hater of the first order, which might account for the article's negative tone. And despite excellent sources, such as Manny Weltman, the article contains several factual errors. 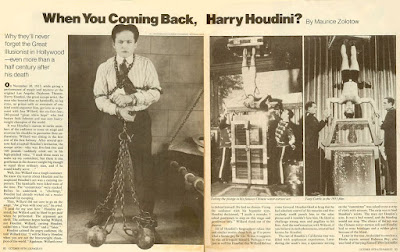 In the same issue, Zolotow provided a short article about "The Houdini Gary Gilmore Connection" in which he spells out the claim by murderer Gary Gilmore that he was the illegitimate grandson of the famous magician. So it's clear Zolotow liked to dish dirt on Houdini.


The Great Balsamo stands as a curiosity. It's not a great novel, nor does it really work as a "veiled" Houdini biography. The real Houdini and his life remians just so much more compelling than any fictional version. But I still think it's an interesting book and a worthy addition to any Houdini bookshelf.


Other selections from the WILD ABOUT HARRY bookshelf:
Written by John Cox at 7:06 AM