Recently I discovered details of Hardeen's first appearance (at least as "Hardeen") in New York City. He played the New York Theater's "Christmas Vaudeville Festival" during the week of December 23, 1907. (You may recall it was at the New York that Bess became trapped in the Metamorphosis trunk.) Below is an ad for that week showing Dash billed as "Wizard of the Handcuffs." 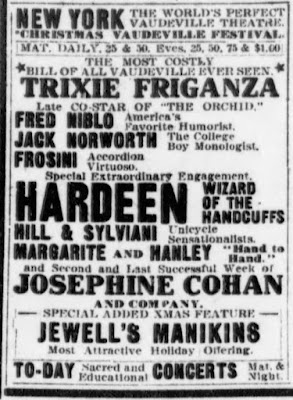 Variety reviewed Hardeen's appearance in their December 28, 1907 issue. There's a lot to like here. I especially like the mention of his voice having "just a hint of the same uncertain and halting delivery" as his brother. Here's the review in full:

New York City was a tough town to win over, even for Houdini (watch for an upcoming post about that). I don't know how often Hardeen played Manhattan, but he seemed more at home in Brooklyn and New Jersey, which he played often. As far as I know, he never attempted any kind of outdoor stunt in the city.