This needle point was made by Bess Houdini and today hangs in the home of her great-nephew, John C. Hinson. It depicts...well, you know who that is! (No, not him.) 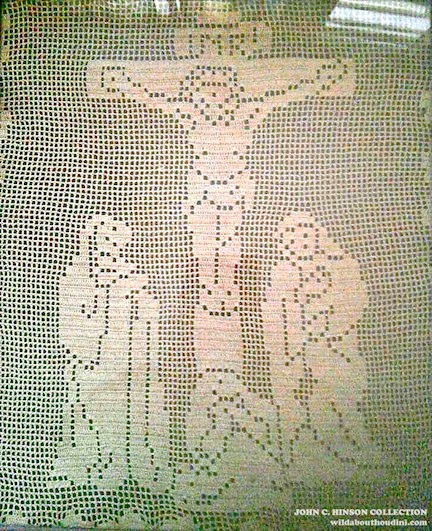 Bess was raised in a strict Roman Catholic family. Her going into show business and marrying a Jewish magician estranged her from her mother who was convinced Houdini was the devil. But fame and wealth seemed to soothe Mrs. Rahner's religious objections, and she even came to live with the Houdinis in 278.

Bess maintained her religious beliefs and, like her mother, was highly superstitious (it's said she never wore yellow because it was bad luck and refused to enter a room if someone had whistled in it). Based on her letters, she appears to have re-embraced her Catholic faith later in life when this needle point was made. Although she was not so devout that she didn't find fun in naming her pet marmoset "Satan."