Whoa! Was there a Water Torture Cell movie? 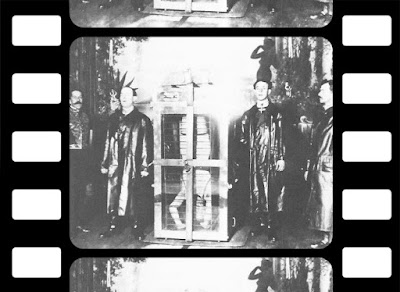 Film of Houdini doing his Chinese Water Torture Cell is high on the wish list of all Houdini nuts. But no footage is known to exist, and I've never thought it was very likely Houdini ever filmed his greatest stage escape. However, I recently found something that suggests there may have been some kind of film after all!

The below is from a review of Houdini's show at the Palace Theater in the December 27, 1916 issue of The New York Clipper. 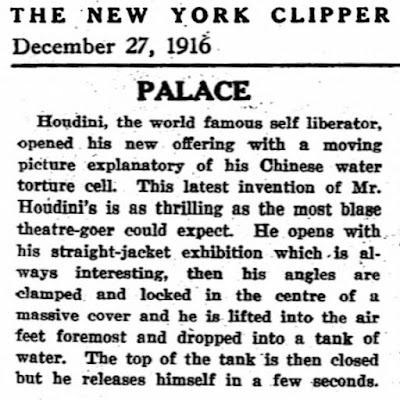 "A moving picture explanatory of his Chinese water torture cell." Holy smokes! What could this have shown?

This footage would have been silent, and because it's an "explanatory", it may have been entirely made up of text. It could be Houdini's familiar stage patter (as heard in his voice recordings) on individual text cards. But it's also possible film footage of the apparatus being explained might have been interspersed between the text. I doubt Houdini would have showed himself being raised above the cell or lowered inside, as that would spoil what was to come.

Below is what might be a second mention when he was playing Keith's Theater in Boston in 1921.


Showing movies were a regular part of Houdini's act at this time. These were typically of an outdoor stunt or his 1909 short The Adventures of Houdini in Paris (or both). I've seen many mentions of these in reviews. But apart from the above, I've never read any mention of this Water Torture Cell movie. Did these reviewers get their notes scrambled? Or did other reviewers feel it not necessary to mention what was just an explanatory film?

The possibility of any kind of Water Torture Cell film footage is exciting, so this is one to hold out hope for, if only to see it in our minds.