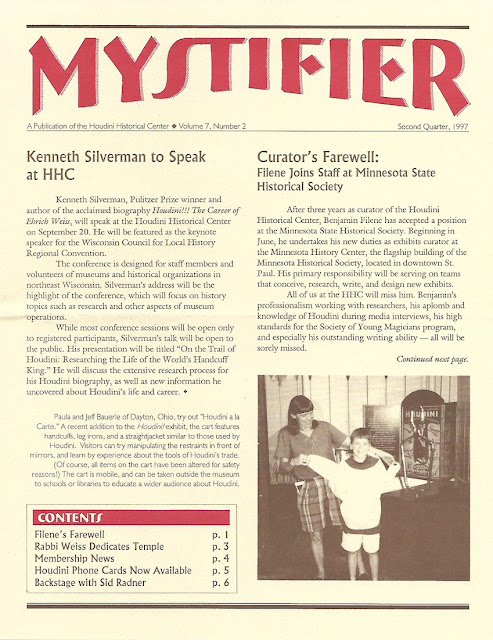 The Second Quarter 1997 Mystifier continues coverage of the Rabbi Weiss documents recently acquired by the HHC. This time curator Benjamin Filene examines a prayer Rabbi Weiss delivered at the opening of the first Appleton Temple on the corner of College Avenue and Oneida Street on October 28, 1878.

A synagogue, Rabbi Weiss emphasizes further, is built not for God, but for the Jewish community itself. The first temple, then, was an essential step in forging strong bonds among the Jewish residents.

Rabbi Weiss's emphasis on community only underscores the extent to which his dismissal by the Appleton congregation in 1882 must have been a personal tragedy. Only months before his dismissal, the congregation moved into a beautiful new building of its own -- a place that offered even greater opportunities for forging community -- Rabbi Weiss was cut off form the community he had hoped to build and thrive within.


The remainder of the issue is largely taken up with HHC business, including the announcement that curator Filene will be leaving the center for a new job at the Minnesota State Historical Society. It also notes that Ken Silverman has been awarded the Milbourne Christopher prize, and that he will speak at the HHC on September 20 as the keynote speaker for the Wisconsin Council for Local History Regional Convention.

The museum store announces the arrival of Houdini pre-paid phones cards. The cards come in sets of three (12 total) and feature images of Houdini from the HHC collection. Phone cards were popular in the 1990s. Each card allows for 30 minutes of long distance calls inside the U.S. (I have a set of these and will share in a future post.)

In his "Backstage" column, Sid Radner reports that Gene Gamache's documentary Houdini: People Came to See Him Die has won a TELLY award. He says he recently visited Geno Munari's new Houdini's Magic Shop in the New York New York Hotel in Las Vegas. Sid writes, apparently without irony, that, "Foreign visitors or those from the west coast need not go east to see New York City anymore--the flavor and landmarks of the Big Apple are recreated vividly and thoroughly at the hotel." Good to know!

Sid continues by saying that he and Houdini Magical Hall of Fame owner Henry Muller attended a performance of the new musical Ragtime in Toronto. "The show has a prominent Houdini presence," reports Sid. He notes the Silverman book will be published in Japan at the end of the year. He also once again gives a shout-out to the Goodspeed Opera House's Houdini musical, and again says he wishes the U.S. postal service would honor Houdini with a stamp.