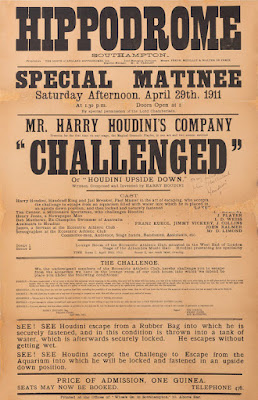 This was a short play Houdini performed only one time for the purpose of licensing his yet-to-be-revealed Water Torture Cell. The poster is signed by Houdini to magician John Mulholland.

I admit I'm surprised this didn't go higher. It's of extreme historical significance, signed, and the only known copy (maybe the only one ever made). But maybe because it doesn't feature any kind of image is what kept the price in check.

Another rarity was a playbill for Houdini's appearance at the Melbourne Opera House during the week of February 26, 1910. Items from Houdini's one time tour of Australia are exceedingly scarce. It sold for $3,360 (including premium) on a $2,500 - $3,500 estimate.