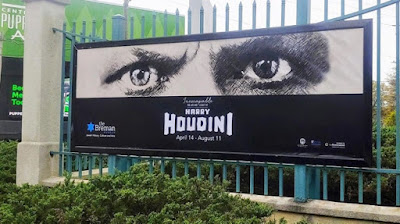 Today sees the opening of Inescapable: The Life and Legacy of Harry Houdini at The Breman Museum in Atlanta Georgia. The exhibition will be on show until August 11.

Inescapable, curated by performer and magician David London, tells the story of how Ehrich Weiss became Harry Houdini and investigates the technologies, marketing prowess and entertainment trends that transformed him into a superstar. On one level, the exhibit is pure fun – incorporating magic, escapes, seances, films, rare artifacts and hands-on illusions. On a deeper level, the exhibit pulls back the curtain, revealing the story of the man behind the image.​


The museum has announced their lineup of related events, including my own talk on Houdini in Early Cinema on July 14 at 2:00 PM. Hope to see you there!