The Grim Game screening at the Sierra Madre Playhouse, May 3 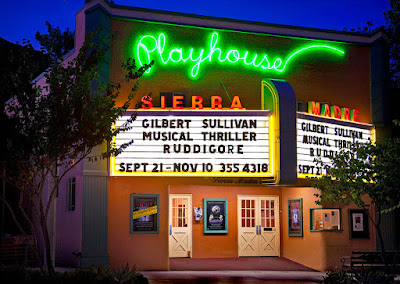 Houdini's The Grim Game will screen at the historic Sierra Madre Playhouse in Sierra Madre, California on May 3 at 8:00pm. The film will have musical accompaniment by Michael Mortilla and violinist Nicole Garcia. I will introduce the film. Below are details.

In collaboration with the Catalina Island Museum and in celebration of its own beginnings as a silent movie house, the Sierra Madre Playhouse is proud to present a screening of the recently rediscovered Houdini silent film, The Grim Game!

Everyone is invited to step back into 1919 -- one hundred years ago -- and see this lost classic as it was meant to be seen, with live accompaniment by the doyen of silent film musicians, Michael Mortilla, and violinist Nicole Garcia. This exciting event will be introduced by Houdini expert John Cox (www.wildabouthoudini.com). Michael will talk about the importance of music in the silent era.

The Grim Game is a silent drama that showcases Houdini's astonishing, world-famous talents as an escapologist, stunt performer and aviator. The film presents a series of Houdini's trademark stunts and escapes and builds to an airplane pursuit climaxed by a mid-air collision.
​
The film was considered lost for decades until it was rediscovered, restored and shown in 2015. It’s a fascinating cinematic record, revealing the reason that Houdini was one of the biggest stars of the early 20th century.

Now, for one night only, travel in time with us back in the Playhouse's history and see this recently rediscovered classic at Sierra Madre Playhouse!


Michael Mortilla made Terror Island soar last year. I can only imagine how well The Grim Game is going to play with his music. I'd encourage everyone who can make this or the Catalina screening on the 17th to do so. This is the way to see Houdini's best film.