Today sees the release of two new Houdini books in the UK. First up is a children's biography Harry (Houdini) by Kjartan Poskitt with illustrations by Geraint Ford. This is part of the "First Names" series. 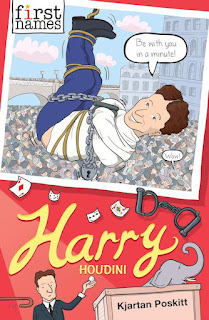 True life stories of the most amazing people EVER! Meet HARRY HOUDINI, the brilliant escape artist who thrilled the world with his death-defying stunts and awesome showmanship. Find out how he was inspired by a man with no head, why he kept asking to be put in jail (and how he got out again) and why he dangled upside down from a crane 120 feet up in the air. Get to know HARRY on first name terms.


Purchase Harry (Houdini) at Amazon.co.uk. A U.S. edition will be released in August. 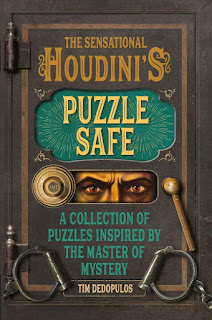 The Sensational Houdini's Puzzle Safe contains 50 exciting puzzles inspired by the greatest escapologist to have ever lived. With puzzle chains where one wrong answer can leave you locked in a never-ending circle of puzzles, and logic problems designed to confound the minds of the unworthy, this puzzle book is an enjoyable test for all. Unlock your brain and see if you can escape the challenges inside.