A close call in Atlantic City

It was on this day in 1908 that Houdini suffered a mishap while doing a handcuffed dive from "Young's Pier" in Atlantic City. The clipping below is from the June 16, 1908 Wilmington Delaware News Journal. 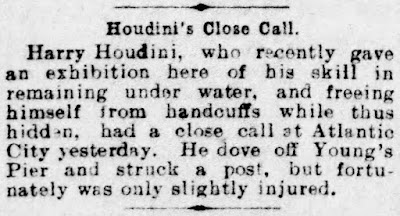 The only other mention of this accident I can find is in The Secret Life of Houdini by William Kalush and Larry Sloman. That book dates it as having happened on June 17, but the News Journal clipping shows that can't be correct. It also lays the blame for his injury on the ocean floor rather than a post.

"On June 17, 1908, Houdini, heavily manacled, dove off Young’s Pier at Atlantic City, New Jersey, before a crowd of more than twenty thousand. He usually jumped feetfirst into waters that he was unfamiliar with, but on this day, he decided to dive, despite being warned against that by the lifeguards. He knifed through the water perfectly but then struck his head on the bottom of the ocean floor. Dazed and bleeding, he somehow managed to remove his handcuffs."


Curiously, Houdini appears to have been on vacation in Atlantic City this week, so it's unclear why he would be doing an outdoor stunt in the first place. Unless it was to impress his mother, who was vacationing with him, or Harry Kellar, who had recently retired to Atlantic City. The below photo of Houdini and Kellar was taken by Franz Kukol three days after the jump. Houdini doesn't appear to be any worse for wear from his mishap. 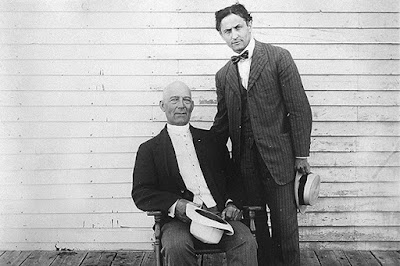 It's not entirely clear if Houdini's jump was made from Young's Ocean Pier built in 1891 or Young's Million Dollar Pier built in 1906. But I think the newspapers would have specified if it was the newer pier, so I'm guessing it was the original (below). 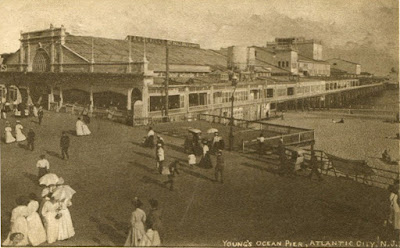 TODAY in Houdini History (May 28)