A close call in the Water Torture Cell 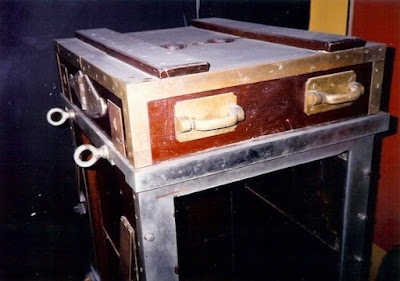 Houdini breaking his ankle in the Water Torture Cell in 1926 is his only known accident while performing the famous escape. But Houdini did the escape for 14 years, so we can assume there must have been other mishaps or close calls. Now I've found one!

The below occurred while Houdini was performing at the Palace Theatre in New York in January 1917.


While this doesn't raise to the level of a true accident, it does shows the dangers of doing any water escape. And unlike modern Water Torture Cells--which are quickly locked by padlocks--Houdini's cell required his upward folding hasps to be perfectly slotted into the locks which then required a full turn of a key. So I can see how this happened. Good thing Houdini could hold his breath for over three minutes!

Below are links to a few other close calls.

UPDATE: Jim Criswell reminds me of this quote from an interview with Dorothy Young:

"And, then the very, very exciting thing was Water Torture Cell. [...] I stood with Mrs. H. often, and she said only once in their life, did he have to give the signal to be taken out."