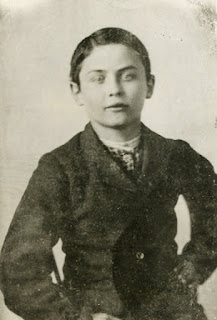 Ruth Brandon's 1993 biography, The Life and Many Deaths of Harry Houdini, is not a book I reference often. Silverman and Christopher are my usual go-to sources. But maybe this is a mistake. Because recently while thumbing through the Brandon book, I spotted something I don't believe has appeared in any other biography. And it's quite a significant piece of early Houdini history!

On page 20-21 (of the U.S. hardcover), Brandon quotes an undated letter written by Ehrich Weiss to his mother when he was "ten or eleven." This is not the well-known "dear Ma" postcard. This is something else entirely, and would be only the second known letter between Houdini and his mother (Houdini was buried with all their correspondence).

I was excited to see Brandon sourced the letter to the Harry Ransom Center at the University of Texas at Austin. So I reached out to our good friend Eric Colleary, who was kind enough to provide an image of the letter for me to share here on WILD ABOUT HARRY. Drink it in! 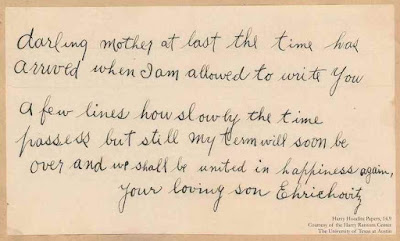 darling mother at last time time has arrived when I am allowed to write you a few lines how slowly the time passess but still my term will soon be over and we shall be united in happiness again. your loving son Ehrichovitz.


Okay, let's unpack this one!

As this letter is undated, I first wanted to satisfy myself that it was actually written by the young Houdini and not as an adult. The fact that he signs it "Ehrich" doesn't really tell us much as it's likely he signed all letters to his mother with his real name. The handwriting is the key, and it does nicely match the familiar "Dear Ma" postcard (see below). He's writing more slowly and carefully on this one, but it still shows the uncertain and cautious penmanship of a young person. (Brandon calls it "scrawled", which it certainly is not.) Houdini's handwriting because worse with age, so this does appear to be written by the young Ehrich Weiss.

But the real intriguing thing here is his use of the word "term." On the face of it, "term" would imply a school of some kind. This is why Brandon quotes the letter, concluding, "at some point there seems to have been an interval of enforced study."

But there's precious little known about Ehrich Weiss's eduction. There's a photo (in the collection of Dr. Bruce Averbook) of Ehrich and classmates in front of an Appleton schoolhouse. Manny Weltman in Houdini: Escape into Legend says he and his brothers where enrolled at the Humbolt Avenue School in Milwaukee ("but they were always playing hooky, preferring to roam the streets, get acquainted with the kids, and join the gang"). It's also said he would study at various pop-up schools run by his father. But this letter suggests a boarding school of some kind, distant and removed from his family and mother. So none of his known schooling seems to fit this.

It's maybe worth reconsidering the word "term." Should we automatically assume a school? His reference to being "allowed to write" suggests strictness in whatever institution he is writing from. Would a school discourage letter writing?

Is it possible the young Ehrich Weiss did a stint in a reformatory? The adult Houdini did reminisce about stealing eggs from stores in Milwaukee, and he was a lifelong brawler. So maybe at some point he got himself into enough trouble to receive some institutional punishment? Of course, this would never make it into his official biography, whereas you'd think a boarding school education would as Houdini was always eager to showcase his intellect.

The last thing is the signature, Ehrichovitz. The addition of "ovitz" is curious, but it's likely just an affectionate or playful sign off. He'd sometimes sign love letters to Bess, "Houdinisky."

But this letter reveals one thing I think we can all agree on. This boy loved his mama!

Thanks to Eric Colleary for sharing this remarkable artifact. The Houdini Collections are open to the public and available to search via finding aids at the Ransom Center website.

UPDATE: Our friend and crack librarian at the Magic Castle, Joe Fox, has solved the mystery. And it looks like I have serious egg on my face. This letter is a fabrication created by Houdini to illustrate an article about code breaking in the April 1908 issue of his Conjures Monthly Magazine. See below: 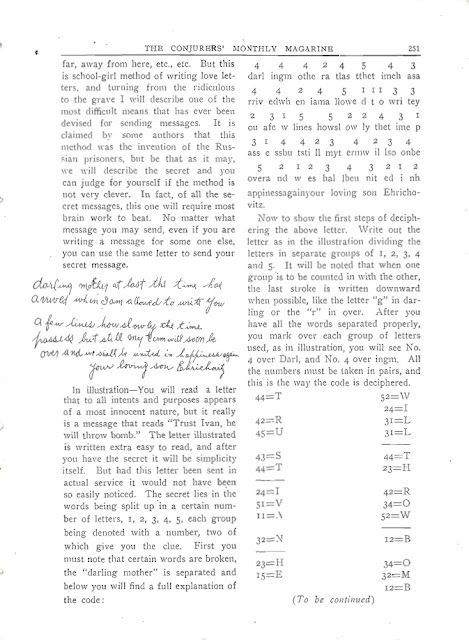 Guess this is why it was among Houdini's personal papers and not in his casket.