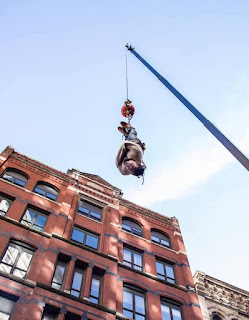 Magician and escape artist Lee Terbosic successfully recreated Houdini's suspended straitjacket escape today in Pittsburgh, 100 years to the day that Houdini himself performed the same feat at the same spot.

Lee did a great job publicizing the escape as "HOUDINI 100" and drew a large crowd. While maybe not Houdini-sized, the crowd was still much larger than we typically see for suspended straitjacket escapes these days. The escape was also streamed live on Facebook.

PennLive reports that Pittsburgh resident Richard Mehrenberg came to watch the escape because his father saw Houdini's original stunt in 1916. He brought along his son and grandson to watch. "It's tradition," he joked.

And even though Lee did employe what we call a straitjacket fail, it was still a well-staged escape and a great centennial tribute to Houdini.


You can watch video of the escape at Lee Terbosic's Facebook page. The above photo of Lee in action is from Epicast TV.