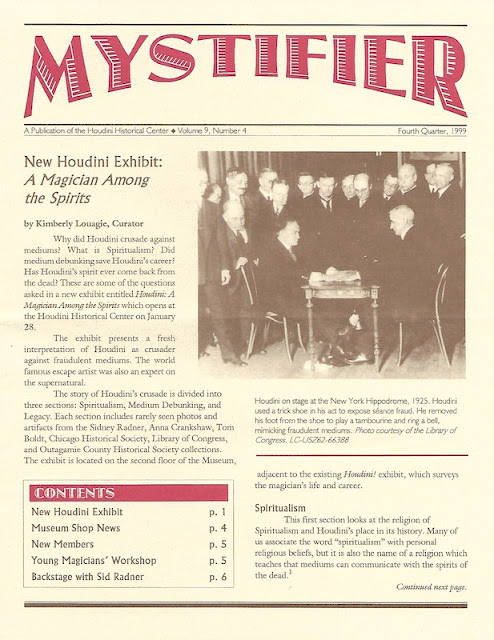 The Fourth Quarter 1999 Mystifier marks the opening of a new HHC exhibition, Houdini: A Magician Among the Spirits, with a lengthy article by curator Kimberly Louagie giving an overview of Houdini's involvement with Spiritualism. It's well researched and doesn't fall into any of the familiar narrative traps (no Mama death a motivator), but as with Louagie's other Mystifier contributions, it's aimed more at the general reader than the hardcore Houdini buff.

The newsletter continues with news of new posters at the museum shop and a report on the recent Young Magicians workshop held at the HHC. New HHC members and recent donors are also listed.


In his "Backstage" column, Sid Radner describes the 1999 Official Houdini Seance held at the Magic Circle in London. Among the attendees was Mick Hanzlik and Frank Koval. Sid then reports on the legal takedown of a Houdini family impostor:

As the result of a federal court case, the imposter who claimed to be a grand-nephew of Houdini will do so no longer. The alleged "Hardeen H. Houdini" is actually Donald Ferguson. The federal court has ordered him to stop making false claims and has ordered him to cease using the Houdini and Hardeen names. His website will be removed from the Internet. Houdini would no doubt be pleased, as he too fought imposters' use of his name.


Sid concludes with news that a new Houdini documentary produced by Nancy Porter Productions for WGBH will air as part of the PBS American Experience series in January 24, 2000. (If we all survive the "Millennium Bug"!)